It’s only Day 2 of the Venice Film Festival and already everything’s cooking: Yesterday, critics and journalists greeted the opening film, Damien Chazelle’s La La Land, with a fairly rapturous reception. But by this morning, we’d all turned our attention to the next big-deal screening, of Denis Villeneuve’s pensive science fiction parable Arrival. Amy Adams plays Dr. Louise Banks, a linguist brought in by the U.S. military to decipher the language of alien beings who have arrived on Earth in 12 matching stone-gray contact-lens-shaped ships, each parked in a different country. (In the States, rural Montana gets the honors.) Louise makes fairly efficient progress in her efforts to communicate with these interlopers, seven-legged creatures with big heads, wrinkly skin and no discernible mouths, who come to be called heptopods. But as usual, Earthlings aren’t so good at communicating with one another: China wants to attack the heptapods, before the heptapods attack it. The United States military is veering toward aggression too, although no one is really sure what to do. Meanwhile Louise—with the help of theoretical physicist Ian Donnelly (Jeremy Renner)—is desperate to discern the aliens’ intentions by learning their language, expressed in an alphabet of circles dotted with not-so-random ink splotches.

Louise has suffered a deep personal trauma, outlined succinctly in the movie’s opening minutes. She’s a smart, unflappable, matter-of-fact type, not susceptible to emotional extremes: No wonder science-dude Ian is so attracted to her. The more Louise learns about the heptopods, the more we learn about her, as the movie spirals out in ever-widening circles, posing questions about how much—or how little—awareness we human beings tend to have about our own lives.

Arrival gives us a lot to take in, and the picture is big, somber and grand, if in the end somewhat sterile: Villeneuve (director of Prisoners and Sicario), working from Ted Chiang’s short story “Story of Your Life,” may be stretching the profundities a bit too far. But Adams gives a nicely polished, muted performance: She keeps the story grounded when the ideas Villeneuve is striving for threaten to get too lofty. And the picture is intelligently and effectively crafted, one of those enterprises where the cinematography, sound design and score, as well as the special effects, melt into a seamless, organic whole. You don’t look at Arrival and think, “Oh, that cool visual stuff was obviously added later” (even if it was).

And in the movie’s best moments, that visual stuff is pretty wondrous, particularly the sequence in which Louise, Ian and their military companions suit up to approach the aliens. (A portal opens in their craft every 18 hours.) It’s Louise and Ian’s first time doing so: They don puffy orange airtight suits, and are at first unsettled by the rather fluid gravitational properties of the stone-colored space thing—Louise, especially, can’t bring herself to take that first floating step away from the solidity she knows, or thinks she knows. Glimpsed through their helmets, Ian and Louise look almost medievally mysterious—even Renner’s glorious Popeye face takes on a solemn, dignified glow. (The cinematography is by Bradford Young, who also shot Selma and A Most Violent Year.) We hear the pillowy echo of their breathing, heavy and measured. Jóhann Jóhannsson’s score is so integral to the images that it may as well be their heartbeat—it’s spooky and sonorous, a spectral hum. And when the two creatures speak—Louise and Ian have nicknamed them Abbott and Costello—their words resemble a sea beast’s groan. Like the movie around them, they strive to express what is nearly inexpressible, and to be understood by anyone who happens to be listening closely enough. 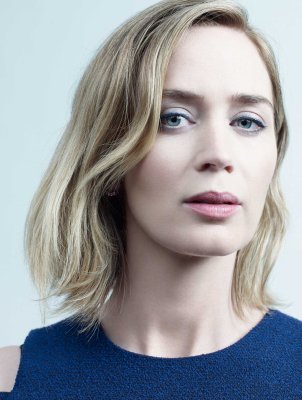 Emily Blunt’s Life is Nothing Like You Think It Is—and She Likes It That Way
Next Up: Editor's Pick