Cambodian Immigration Officials 'Beat Up Spanish Student and Filmed It'

A Spanish doctoral student, expelled from Cambodia two weeks ago for participating in anti-government protests, has alleged that Cambodian immigration officers physically abused her in custody before she left.

In a letter sent to the Cambodia Daily newspaper, Marga Bujosa Segado claimed this week that she was kicked in the stomach and torso by two immigration officials while five others watched, “one of them shooting a video of the battering.”

Bujosa Segado, 38, is a doctoral student at the University of Granada who was based in Pnom Penh. She was reportedly arrested in the Cambodian capital on Aug. 16, the day before her alleged beating and deportation, for protesting the detention of two local activists.

Senior officials from Cambodia’s immigration department have rubbished her claims of mistreatment, with the department’s head of investigations Uk Heisela telling the Cambodia Daily that she “tried to use martial arts” on his staff.

He also called her a “drug user” and said the photos on her phone — which his men deleted — were removed over concerns that she would use them “to do black magic,” because she was a sorceress.

“Everyone knows the Spanish practice magic,” he said.

Bujosa Segado responded by calling Heisela’s explanation “ridiculous,” according to the Cambodia Daily.

“I think the one on drugs is him,” she said. 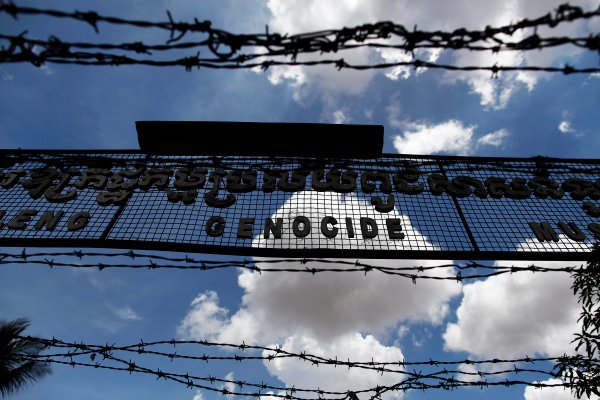 There Are Pokémon Gyms at a Cambodian Genocide Museum
Next Up: Editor's Pick