Donald Trump used a hastily arranged visit to Mexico City to heap praise upon the Mexican-American community he has so far failed to woo during a presidential campaign that began with claims that the country was sending rapists and criminals into the U.S.

“I happen to have a tremendous feeling for Mexican-Americans not only in terms of friendships, but in terms of the tremendous numbers that I employ in the United States and they are amazing people, amazing people,” Trump said. “And the United States first, second and third generation Mexicans are just beyond reproach. Spectacular, spectacular hard-working people. I have such great respect for them and their strong values of family, faith and community.”

Trump also praised Mexican President Enrique Peña Nieto, who in the past likened his nationalistic tone to that of Adolf Hitler and Benito Mussolini and warned that his rhetoric was damaging U.S.-Mexico relations. He also outlined shared goals of ending illegal immigration, securing the border, fighting illegal drugs, improving the North American Free Trade Agreement and keeping manufacturing in North America.

During a brief question-and-answer session after the two read prepared statements, Trump stated that he discussed his signature campaign agenda item to build a wall along the border with Peña Nieto, but said he didn’t bring up his promise to make Mexico pay for it—an assertion the Mexican leader has repeatedly rejected.

“Who pays for the wall? We didn’t discuss that,” Trump said, after describing the conversation between them as “a very substantive, direct and constructive exchange of ideas.”

The hastily arranged visit tested the bounds of international protocol and the collective political memory, as Trump attempted to whitewash more than a year of criticism of Mexico and its people that has proven to be a drag on his presidential aspirations. Overwhelmingly disliked among Hispanic voters, the visit came hours before Trump is set to clarify his conflicting policy positions on immigration and dealing with the 11 million people in the U.S. illegally—of which about half hail from Mexico.

The trip was a high-stakes gamble by the billionaire reality television star-turned candidate, who is trailing in swing state and national polls, in meeting one of his most vocal critics on his home soil.

Trump arrived in Mexico aboard his private plane after morning campaign fundraisers in California, and flew to Los Pinos, the Mexican president’s official residence and office, aboard a private helicopter. Joined by Alabama Sen. Jeff Sessions, one of the most strident critics of illegal immigration, and former New York City Mayor Giuliani, Trump met with Peña Nieto for more than an hour.

Peña Nieto and Trump emerged to face a sea of television cameras and reporters, where the pair tried to paper over the vast divide between them on policy and tone. Peña Nieto said he had “respect” for Trump, despite his previous attacks, while Trump said he holds Mexican-Americans “beyond reproach.”

“I shared with Mr. Trump my conviction that the free trade of North America has done a lot of good” for both countries, Peña Nieto said, defending NAFTA, the trade agreement maligned by Trump on the campaign trail. He added that trade shouldn’t be viewed zero sum, as espoused by Trump, but suggested, in a small concession to the billionaire, that the agreement could be improved.

Noting that all nations have a right to protected borders, the Mexican leader added that Mexico too needed protection from the illegal flow of drugs, firearms, and money southward across the U.S.-Mexico border. “Our border must be seen as a joint opportunity,” he said.

As the Mexican president spoke, Trump rarely looked at Peña Nieto, while an interpreter stood at his side to translate from Spanish to English. Trump called the meeting “an honor,” and softened his campaign rhetoric on trade—in which he frequently criticizes Mexico for “stealing” American jobs—to stating that the Western Hemisphere must stand united against low-wage manufacturing in Asia.

The trip came in only a few days after Peña Nieto, who faces low approval ratings of his own at home, sent messages Friday to both Trump and Hillary Clinton inviting them to visit. Trump aides saw it as an opportunity to dominate the media cycle and show the candidate’s presidential side as he was set to deliver an immigration policy speech. The final details of the trip were still being worked out as Trump was in the air, as campaign officials struggled with whether the candidate and the president would take questions.

Asked about the trip Wednesday, White House Press Secretary Josh Earnest cast doubts about Trump’s reception in Mexico, noting the glowing reception Obama received when he traveled overseas in 2008. “One of the highlights was a trip to Germany, where the president spoke in Berlin to a crowd of about 100,000 Germans who warmly received him and enthusiastically cheered his speech,” Earnest said dryly. “We’ll see if Mr. Trump is similarly received.”

The trip was Trump’s second trip abroad since launching his campaign, the first being a June visit to the United Kingdom to mark the opening of one of his golf courses just days after the UK voted to leave the European Union.

The Clinton campaign confirmed Tuesday it received a similar invitation, saying senior aides are in “regular” contact with the Mexican government and that she looks forward to speaking with Peña Nieto again “at the appropriate time.” “What ultimately matters is what Donald Trump says to voters in Arizona, not Mexico, and whether he remains committed to the splitting up of families and deportation of millions,” Clinton communications director Jennifer Palmieri said in a statement.

With reporting from Ioan Grillo in Mexico City. 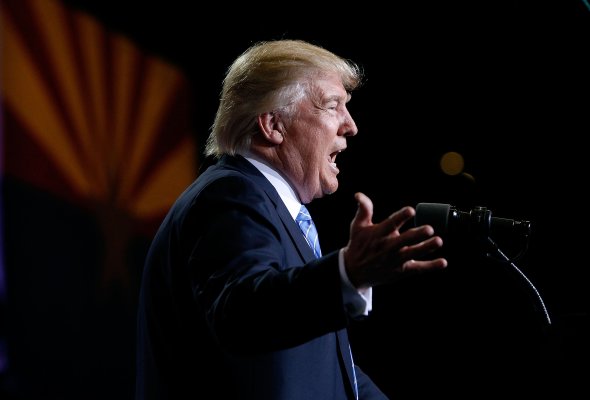