You Asked: What Is a Chromebook?

A little over five years ago, Sundar Pichai, then Google’s vice president of Chrome, took the stage at the company’s 2011 developer conference and revealed a surprising new product from the search giant. It wasn’t a new advertising program, search algorithm, or app. Instead, it was an entirely new personal computing operating system, Chrome OS.

How important has this product been for Google? Well, Pichai is now the company’s CEO. Chrome, the web browser that’s the backbone of the operating system, is the most widely used in the world. And this year, Chrome OS machines outsold Macs for the first time. So in other words, Chrome has caught on big time.

When Google set out to build a system optimized for how people were using their computers in 2011 — and how they’d use them today — they began by looking at the operating systems on the market. “Most of these systems were designed 25-plus years ago,” says Kan Liu, Google’s senior director of product management with Chrome. “If you think of what you do on a PC today, I would argue that 95% of the time that you spend is in a browser.”

So, Google built Chrome around the browser. That eliminated a lot of what Liu calls “crust that had built up over time” on legacy computers like Windows and Mac machines. “They were designed for use cases (like floppy disk drives) that don’t exist anymore, and enable more holes for viruses to attack,” he says.

The result was Chromebooks, laptops that run Google’s Chrome OS. They come in many different shapes, sizes, and price points, but they all share a few common characteristics. Most noticeably, they start up fast, have built-in virus protection, automatically update their software, and are generally inexpensive.

For these reasons, Chromebooks have becoming increasingly popular with casual Internet users — people who just want to surf the Web — and in the education field, a market that Apple had once dominated. It’s interesting that Chromebooks are taking on Macs, because when the system was revealed, experts had Google gunning for Microsoft and the popular, inexpensive ultrabooks and netbooks of that day. But with Windows 10 shifting Microsoft’s strategy towards hybrid tablet-turned-computers, an opportunity opened up for Google in low-cost laptops.

And manufacturers followed. That’s why — just as you can find many variants of Android phones and tablets — you will also see Chromebooks from many different makers.

Currently, manufacturers such as Acer, ASUS, Dell, LG, Samsung, and Toshiba all make Chromebooks. Haier and Hisense currently make the least expensive models on the market, while HP puts out one of the best models at just under $400. Every Chromebook is a little different, helping to meet the needs of a variety of users. Some, like the Acer Chromebook R11, have plenty of ports, while others, like the Dell Chromebook 13, have excellent (13 hours) battery life.

But one thing that unites the platform is how people use it. First, in an increasingly cloud-based computing world, it makes ever-more sense to use an operating system built around a web browser like Chrome. Of course Google has built its own suite of productivity apps like Docs, Sheets, and Gmail, but if you can’t ween yourself off Microsoft’s programs, Word, Excel, and Outlook offer browser-based solutions too. There’s also a Chrome Web Store for adding apps that were custom-built for the platform.

But even more game-changing is Chrome OS’s ability to port your computer to any Chromebook you might use. Simply type in your Google username and password into a machine, and all your apps, documents, bookmarks, and other work appears on the screen, exactly where you left off on another Chromebook.

Chrome’s capabilities are catching on even outside education. For instance, some companies are integrating these low-cost machines into their workflow. “Every Starbucks you walk into has a Chromebook in it for their employees to use in their daily activities, whether it’s checking their mail or logging [human resources] data, or whatever” says Lui.

However, if there is one knock on Chrome machines, it’s how little onboard storage they tend to have. Because the machines are so reliant on the web, they’re able to cut costs by skipping on big hard drives. Google gets around this by offering 100 gigabytes of storage free (for the first two years, at least). But even these largely Internet-based he machines aren’t lifeless without a connection — apps including Gmail and Google Docs will run offline, syncing up once you’re online again. And that probably won’t take long, considering how connected we are these days, anyway. 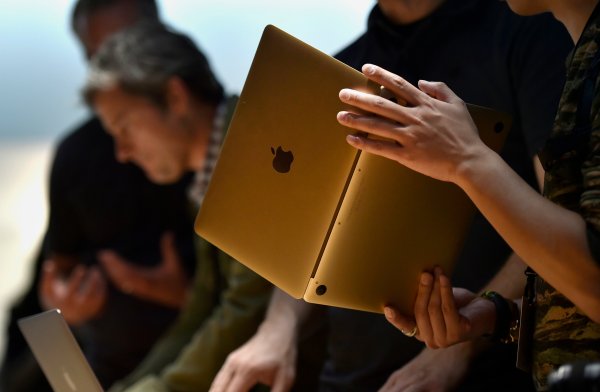 Here the Other New Products Apple May be Working On
Next Up: Editor's Pick