The disclosure by Democratic presidential nominee Hillary Clinton that she is being treated for pneumonia has once again raised the question of what candidates should tell voters about their health. Meanwhile, Donald Trump has promised to discuss his “personal health regimen” on The Dr. Oz Show on Thursday and to release the results of a recent physical. Both of the top candidates in 2016 have provoked repeated calls for them to release more complete medical records, a step that has in recent years become so expected during campaign season that its omission is noteworthy.

Looking at American history as a whole, however, the act of releasing any such records at all is rare.

As presidential historian Robert Dallek told NPR back in 2008, candidates and presidents have generally hidden their ailments from the public. And plenty of U.S. Presidents have served with health conditions that might have made voters think twice: Chester Arthur had a kidney problem; John F. Kennedy had chronic pain, among other health concerns; Woodrow Wilson, who was later laid low by a stroke, had already experienced at least one before his election.

By and large, even as presidents’ health concerns affected their ability to govern, American society seemed willing to let candidate health remain a private matter.

That changed in the 1990s, largely due to Paul Tsongas.

The Massachusetts Senator had announced in 1984 that, due to the demands of his treatment for non-Hodgkin’s lymphona, he wouldn’t be running for a second term. By 1992, however, he was back—in a big way. During the Democratic primaries that year, he proved a surprisingly strong challenger for front-runner Bill Clinton.

Tsongas was, as TIME put it, “the first presidential candidate to run openly as a cancer survivor.” More than five years had passed since he was declared cancer-free, and he was hailed by some as an example of just how much life was possible after cancer, though other voters worried that the cancer might return. In response, he emphasized his physical strength in ads, and reassured the nation that his cancer was in remission. To the survivor community, he was an important symbol, coming only two years after the Americans with Disabilities Act established federal protection for cancer patients who were discriminated against, and at a time when that pre-existing condition kept many from becoming insured.

When Tsongas suspended his campaign in March, it was because he had realized that he didn’t have the funds to go the distance to the convention, not because of his health. Bill Clinton was nominated instead, and won the election in November.

But by December, Tsongas was back in the news: he was facing a “small, reportedly cancerous growth in his abdomen,” as TIME phrased it.

Though he had not been elected, he had come close enough for the news to shock the nation. Even as people wished for his recovery, they wondered whether candidates should be required to disclose their full medical records. Tsongas died early in 1997—not directly of cancer, his doctors believed, but from complications after surgery that was required as a result of the cancer treatment. Had he been elected in 1992, his treatment would have been going on during his first term and he would have died two days before the 1997 inauguration.

In addition to the death of Tsongas, that period also saw the 1994 announcement by former President Reagan that he had received a diagnosis of Alzheimer’s disease—news that once again caused the nation to think hard about presidential health. In response to the news, Reagan’s fellow former president Jimmy Carter proposed a radical response: establishing a rule by which doctors (rather than politicians) would determine whether a president was fit to serve. (This idea was not implemented, but versions of it continue to be debated.)

The next major reason for the public’s interest in presidential health came during the 2008 presidential campaign, when John McCain became one of the oldest people to ever be nominated by a major party. (He is also a cancer survivor.) His health was called into question, and McCain ended up allowing journalists to see his health records—perhaps a sign that such disclosures would, from then on, be seen as necessary.

Even so, as Dr. Bruce Patsner pointed out in the journal Health Law Perspectives at the time, the legal basis for demanding someone’s medical records, even a presidential candidates’, is shaky—if not nonexistent. Patsner also pointed out something else worth remembering: of the eight presidents who have died in office, only half were from natural causes related to their health. And of those, Zachary Taylor and William Henry Harrison both died from infections that no health records could have predicted. In most cases then, no amount of disclosure could have predicted the future. 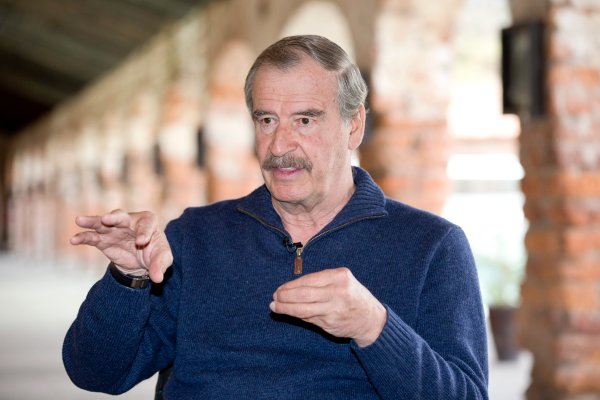 Vicente Fox: Donald Trump Is Like a 'Street Fighter'
Next Up: Editor's Pick