A man holds himself on the side of a boat after jumping into the sea from a crowded wooden boat during a rescue operation at the Mediterranean sea, about 13 miles north of Sabratha, Libya, Monday, Aug. 29, 2016
Emilio Morenatti—AP
By Kate Samuelson

Around 6,500 migrants, said to be from Eritrea and Somalia, have been rescued off the Libya coast by Italian naval ships and vessels as well as the E.U.’s border agency Frontex and the NGOs Proactiva Open Arms and Doctors Without Borders..

According to the BBC, some 40 co-ordinated rescue missions took place about 12 miles off the Libyan town of Sabratha.

Proactiva Open Arms and Doctors Without Borders helped take on some 3,000 people who had been travelling in some 20 small wooden boats, AP reports.

In images and video by AP, migrants from Eritrea and Somalia cheered as the rescue boats arrived, with some jumping into the water and swimming toward them while others carefully carried babies onto the rescue ships.

The boats were too fragile and unequipped for a voyage across the stretch of the Mediterranean. The migrants had set off with a small amount of gasoline in the vessels, hoping to make it at least 15-20 miles out to sea and reach awaiting rescuers.

Tens of thousands of Africans take the Mediterranean Sea route as a gateway to a better life in Europe, alongside those fleeing wars from Syria to Afghanistan. 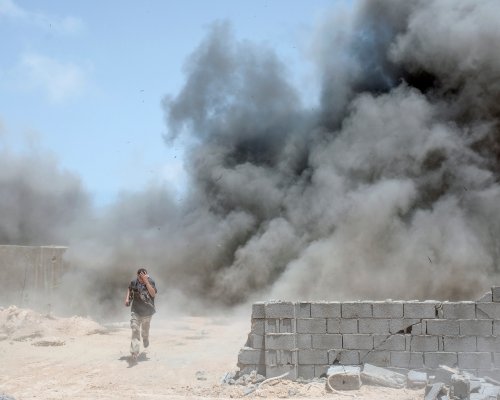 Inside ISIS' Last Bastion in Libya
Next Up: Editor's Pick