Colin Kaepernick and a Brief History of Protest in Sports

San Francisco 49ers quarterback Colin Kaepernick refused to stand during the singing of the national anthem on Friday, sparking a heavy dose of criticism. Kaepernick said he would not “show pride in a flag for a country that oppresses Black people and people of color,” according to an NFL interview on Friday.

Kaepernick’s protest lands him among several other athletes who have used their fame to speak out about political issues of their day.

Athletes have often employed ceremonial moments to take a stand. For example, at the 1906 Olympics (also known as the Intercalated Games), Irish long jumper Peter O’Connor protested after his second-place finish was honored by the raising of the British flag. Wishing to only represent Ireland, and not the whole of Britain, O’Connor scaled the flagpole and waved the Irish flag himself while fellow countryman Con Leahy guarded him at the foot of the pole.

Another such moment was the occasion for protest in 1968, at the Mexico City Olympics, when runners John Carlos and Tommie Smith famously raised their fists in the Black Power salute after winning bronze and gold medals, respectively, while the national anthem played. Their actions outraged many and both runners were suspended from the U.S. team. And Kaepernick isn’t even the first to express himself by sitting during “The Star-Spangled Banner”: in 1996, the NBA’s Mahmoud Abdul-Rauf was nearly suspended for his desire, based on his religion, not to stand during the anthem.

Criticism lobbied at Kaepernick also recalls the wrath Muhammad Ali incurred after refusing to enlist in the Vietnam War in 1967, one of the most notable moments of an athlete standing up for his beliefs. “War is against the teachings of the Koran,” he said at the time. “I’m not trying to dodge the draft [but] we don’t take part in Christian wars.” Ali thrice refused to step forward when his name was called for induction into the U.S. Army, leading to the stripping of his heavyweight title and barring him from boxing. In 1971, the Supreme Court reversed his conviction for his 1967 actions.

During recent years, the Black Lives Matter movement has spurred another wave of high-profile athletes speaking out. In 2014, LeBron James and fellow NBA players Kyrie Irving, Jarret Jack and Kevin Garnett wore “I Can’t Breathe” shirts in reference to the last words of Eric Garner, an unarmed Black man who died after a police officer placed him in a chokehold. They were part of a string of athletes sporting similar shirts during warm-ups in recognition of the protests that stemmed from the lack of indictment of the officer who killed Garner.

The same year, five St. Louis Rams players took the field during a game against the Oakland Raiders with the “Hands Up, Don’t Shoot” pose made iconic by the protests in Ferguson. Neither the players nor the team faced punishment by the NFL, which maintained the players had the right to exercise their free speech. On the other hand, supporting Black Lives Matter had some WNBA players facing potential fines this year after they wore shirts that said “#BlackLivesMatter” during warm-ups before games in the wake of fatal police shootings that rocked the U.S. The WNBA players and teams were fined for wearing the shirts until their protests forced the WNBA to reverse the decision.

Such protest are not confined to professional athletic leagues. In 2014, Knox College basketball player Ariyana Smith graced headlines after protesting during a game against Fontbonne University in Clayton, Mo. During the singing of the national anthem, Smith walked on to the court with her hands raised and fell to the floor for four and a half minutes to protest the police killing of Michael Brown, whose body was left on a street in Ferguson, Mo., for four and a half hours. Smith was suspended from the team, and then reinstated later in the week.

And now that history continues.

“I’ll continue to sit,” Kaepernick told ESPN on Sunday. “I’m going to continue to stand with the people that are being oppressed. To me, that is something that has to change.” 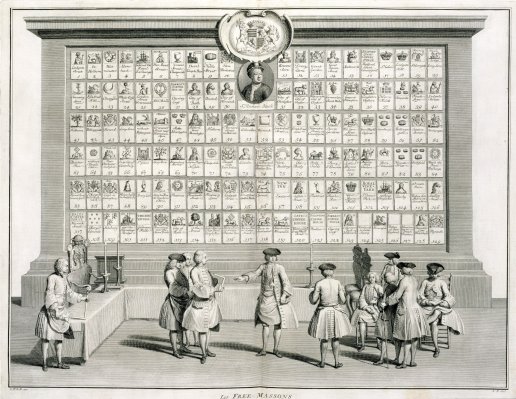 What the Freemasons Taught the World About Secrecy
EDIT POST