Former Marine Al Baldasaro defends the donations of Republican presidential nominee Donald Trump at a news conference at Trump Tower where Trump addressed issues about the money he pledged to donate to veterans groups on May 31, 2016 in New York City.
Spencer Platt/Getty Images
By Katie Reilly

Donald Trump’s adviser on veterans issues said Friday that he regrets the way he phrased his comment that Hillary Clinton should be “shot for treason.”

“I mean, I regret saying it the way I did,” New Hampshire state Rep. Al Baldasaro said in an interview with BuzzFeed. “It’s a shame because I should have spoke out and said she’s got to be found guilty. We’re a country of laws—for treason. I used the word ‘should be,’ and the liberal media took it and ran with it.”

Baldasaro, a veteran, doubled down on the “treason” comment in multiple interviews last month, arguing that Clinton’s use of a private email server as Secretary of State endangered American lives and qualifies as treason. In an interview last week, Baldasaro said his words had been taken out of context, and he said he did not want Clinton to be assassinated.

“The liberal media took what I said and went against the law and the Constitution and ran with it, and they said that I wanted her assassinated, which I never did,” Baldasaro said in an interview with the Springfield Republican/MassLive.com on Aug. 16. “I said I spoke as a veteran, and she should be shot in a firing squad for treason.”

The U.S. Secret Service said it was investigating Baldasaro after his original comments. At the time, Trump spokeswoman Hope Hicks distanced the campaign from the comments, saying “Mr. Trump and the campaign do not agree” that Clinton should be executed. 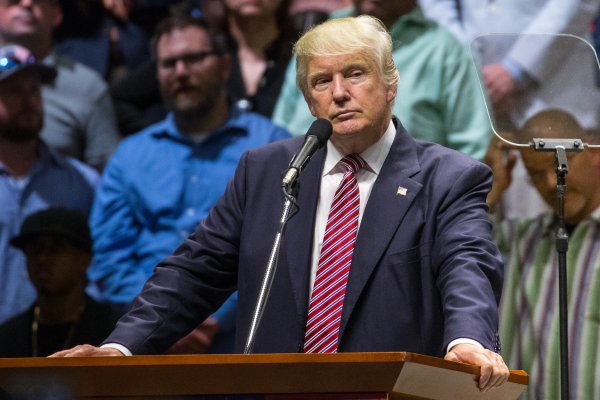 Conservatives Upset by Trump's Immigration 'Softening'
Next Up: Editor's Pick