Muslim Swimsuit Designer: Burkinis and Bikinis Are About Freedom

As a Muslim woman, I have been as captivated as much as the rest of the world with the stories in France surrounding the “Burkini” ban. The extreme absurdity of seeing a group of gun-carrying men in uniform, forcing a woman to undress makes me weep for the state of humanity. The idea that such a simple form self- and religious expression could become such a flash point is almost beyond belief. And that it happened in one of the world’s most prominent liberal democracies is horrifying.

“Burkinis” are essentially full-body swimsuits. They are very similar to what people wear to surf to protect themselves from the sun and wind. Others may wear full-body suits or rashguards to cover themselves from the sun. No one in France would dream of denying the use of a partial wet suit or sun screen on the beach. Yet women were told they could not wear their burkinis to the beaches of 30 French towns.

Although France’s highest court ruled Friday against the burkini ban, the attempt to do so is just an example of the emerging intolerance around the world for people that see the world differently than the accepted “way.” And the violent actions of a small minority of Muslims have unfortunately crystallized people’s perceptions of Muslim traditions as a whole. Rather than focusing on the good, we are quick to judge, condemn and blame out of fear and ignorance of the unknown or misunderstood. So a simple choice in headgear or swimwear is interpreted as a dangerous action and a sign of disloyalty to France’s culture and customs.

Of course, I am not defending any situation where a woman is forced to wear such garb, because I personally know what that kind of oppression feels like. I grew up in Iran after the 1979 Revolution, where strict regulations were imposed on a woman’s dress code. By law, women had to cover everything but their face and hands. When I was 16 years old, I was jailed for five nights and received 40 lashes. It was punishment for the crime of wearing a miniskirt in a privacy of a home at a coed birthday party.

When I moved from a country that forced me to cover myself to a place where I had the freedom to wear what I desired, the meaning of freedom of choice really stood out to me. When I woke up in the morning and considered what I wanted to wear, I realized that I didn’t have to think about rules, restrictions, judgments or punishment. I could finally use my clothes to create an identity for myself the way I wanted to. Today, I am a swimsuit designer because I love fashion and believe that fashion is a form of freedom. While I do not choose to cover myself, I am proud of my Muslim traditions and I applaud women who do wear hijabs and burkinis.

Freedom is not about the amount of clothing you put on or take off, but about having the choice to do so. The last time I went to a beach in France, I saw women who wore hijabs, covered from head to toe, walking on the same beaches as women in their European-cut bikinis. Their freedom of choice empowered me. I found a new respect for women who chose to cover themselves in accordance with their religious beliefs. I also respected those who fearlessly wore bikinis. All of these women had made a choice about how they wanted to present themselves.

Women all around the world should be able to wear what they desire without the fear of judgment, punishment or coercion. When these simple freedoms of choice are taken away from anyone, it takes away their independence and humanity. Allowing the government, religions or even family to dictate such things to her takes away her humanity and reduces her to an object to be controlled by others.

Tala Raassi is an Iranian-American fashion designer and author of the book Fashion is Freedom. 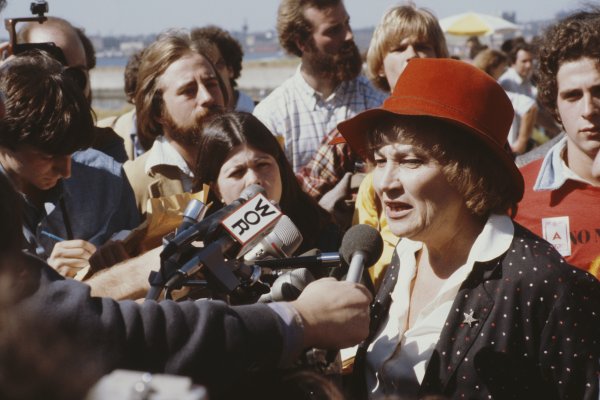 Meet the Woman Behind Women’s Equality Day
Next Up: Editor's Pick