When Britney Spears performed her hit song “I’m A Slave 4 U” at the MTV Video Music Awards fifteen years ago, something very iconic happened: about halfway through the hip-shaking show, Brit strutted across the stage and collected a seven-foot albino Burmese python from another dancer. She then draped this reptile across her shoulders, continuing to dance and twirl with gusto. It was the getup that launched a thousand Halloween costumes, and solidified snakes as definitively sexy in the early 2000s. Britney was already a superstar, but with the snake’s help, she went supernova.

But what happened to that snake?

While we may never know the real purpose of the snake in the performance, we now do know that the giant reptile is — still! — alive and well, according to an animal handler. MTV tracked it down, and learned a few interesting things in the process. For starters, the snake was a female — and a juvenile, at that. She was only about 20 lb. at the time, thankfully. Brit’s dancing partner is currently living with a friend of the handler’s and probably has no idea that she’s a superstar in her own right. May she live happily ever after.

Meanwhile Britney, whose new album Glory came out Friday, will be returning to the VMA stage on Sunday. 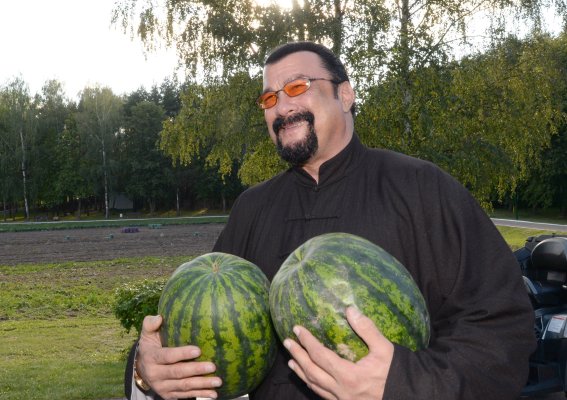 Steven Seagal Given Carrot and Two Watermelons by President of Belarus
Next Up: Editor's Pick