Donald Trump released a video on Instagram rehashing controversies between Hillary Clinton and black voters in 2008, one day after Clinton gave a speech accusing Trump of stoking white nationalism.

The video runs a clip of Clinton appearing on Meet the Press as a presidential candidate in 2008. Tim Russert shows Clinton a headline from South Carolina saying “Clinton Camp Hits Obama: Attacks ‘Painful’ For Black Voters.” It then continues through a montage of clips from the time of gaffes from Clinton’s campaign that may have hurt her with black voters (she ended up losing the black vote to Barack Obama by a large margin).

Trump has been making a new play for minority voters in recent days, saying Thursday that they’ve become a “focal point” of his campaign. He called Clinton a “bigot” at a rally and said she “sees people of color only as votes, not as human beings.”

In a speech Thursday, Clinton fired back at Trump with a scathing critique of his personality and record with black Americans, saying he is “a man with a long history of racial discrimination, who traffics in dark conspiracy theories drawn from the pages of supermarket tabloids and the far dark reaches of the Internet.”

Read more: What Donald Trump Knew About Undocumented Workers at His Signature Tower 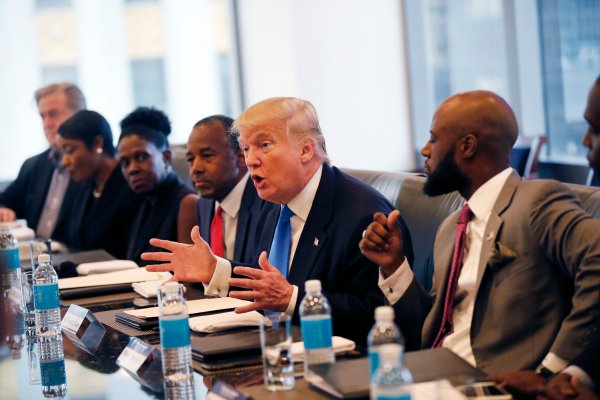 Donald Trump: Black Voters Are a 'Focal Point' of Campaign
Next Up: Editor's Pick