What It's Like to Be a Refugee in Your Own Country

We lived in a mud-walled house that we shared with our domesticated animals. It never bothered me: At least we had a roof over our heads. When I was young, it seemed we were all equals in my community.

Everyone made a great effort to make a living and looked forward to a good meal after a long days work in the farms. People lived in harmony, doing business together and visiting each other during hard times.

But that harmony wasn’t to last. This is how it all started.

When I was about 4 years old, my parents separated. My father was under pressure to marry another wife because my mother had given birth to two girls in a row. My grandmother was furious because she wanted a grandson, as girls were not considered children enough.

My parent’s separation marked our first exit from home. We were displaced by our own relatives.

As a single parent, my mother had to shoulder all the responsibilities. I watched her struggle tirelessly in other people’s farms with the hope of providing for us. My once beautiful and happy mum turned pale and weak with depression. Our family was torn apart and we lacked basic necessities. Our lives were filled with uncertainty, and we were ridiculed in school for being fatherless and poor.

This beast called polygamy stole my childhood happiness and forced us to move from one town to another in search of a new home. We became squatters. But eventually, some of our new neighbors welcomed us, supported us, and became our good friends. Life became a bit more bearable.

Then, as fate would have it, the relative peace we had found suddenly fell apart. Fueled by the tensions of the general presidential election, our new close-knit community began to hate each other on tribal grounds.

Neighbors began killing each other, as if they had never lived alongside each other before. It was not uncommon for teachers to kill their pupils. Once, I saw my male English teacher wielding a panga, or African machete. I remember my mother whisked us towards nearby bushes in an effort to keep us safe.

We ate no food for days; families walked long distances to find safety; houses were torched, and animals were killed in the fields. Everyone feared for their lives. Hatred was the order of the day.

Fighters armed with crude weapons gathered together, ready for a big war. Girls and women were gang raped. Young boys were not spared, as they were forced to become a part of the fighting.

The politicians who fueled the war did not come to our aid, and many innocent people died.

I remember being so scared of losing my mum and siblings. As tensions escalated, my mother did not know where to hide us. Each community was fighting against each other and death was everywhere. Homes were torched. Education came to a halt.

It was the worst time of my life. We became refugees in our own country.

What followed next was a mass exodus to safety.

With my feeble legs, I walked almost 200 kilometers through the forest. It was the only way we could escape our war-torn town. My family became separated, as many families did. Before leaving each other, we uttered words of blessing just in case we never met again.

Two years later, we still could not trace each other. I was taken in by a family who forced me to work for them in order to eat. I was 9 years old.

Then, in 1994, a man who had come to ask for water seemed to recognize me. I looked so much like my mother, and he knew her. The moment we were reunited was so memorable! Much had happened, but no one had died.

Miraculously, our lives went back to normal. As a nation, we were happy that our country was at last peaceful again. It seemed we had learned our lesson.

Fifteen years after the violence started, I was in university in Nakuru. It was 2007 and Kenya was again voting for the next president. The country was experiencing steady economic growth. We had high hopes of seeing a peaceful election and did not wish for a repeat of 1992.

But tribal conflicts again arose. This time, I was alone and unsafe, and also old enough to comprehend what was going on. The same script was repeating itself.

The country was paralyzed. The majority of fighters were unemployed youth. Death was everywhere, and enmity amongst different communities and tribes was at its highest. I wished for peace; I wished there was no election. I wished we had only one tribe and one agenda. Like many people, I sought safety in refugee camps, and somehow made it through.

My life has been full of turbulence, but because I have held on to hope, I have survived. I am working every day to empower women whose voices were suppressed like my mother’s. And I am spearheading efforts to create unity amongst tribes and neighbors through conflict resolution.

As we head for another general election in 2017, I fear our leaders might use unemployed youth again to start conflicts. In the last three months, politicians have been inciting violence in Nairobi. Youth are causing chaos, stealing people’s wares in the shops and burning cars.

I am not certain about anything, but one thing I know for sure is that unless we unite as a country and forget our differences, Kenya will never achieve Vision 2030, which is a development effort to become the socially, politically, and economically stable country we have all hoped for.

When I look back at my life, I want to forget these moments of pain and suffering and division. I dream of a future free of greedy political leaders hungry for power, a future where youth dislike war and are not influenced negatively by politics. I wish for an equitable world where everyone cares for one another.

I am working toward this future every day.

Maureen Bii is a contributor from Kenya. This piece was originally published on World Pulse. Sign up to get international stories of women leading social change delivered to your inbox every month here 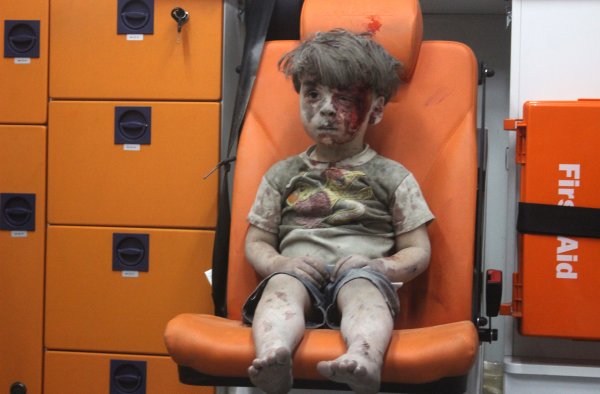 Syria's Children Are the World's Responsibility
Next Up: Editor's Pick