Donald Trump: Black Voters Are a 'Focal Point' of Campaign

Donald Trump has escalated his pitch to black voters in recent days, but some leaders are skeptical the controversial nominee will be able to win them over.

In his past few rallies, Trump has begun saying that he would work harder for black citizens than Democrats, who he says take their support for granted. He emphasizes (and exaggerates) statistics and descriptions of inner city life to enhance his point: “You’re living in poverty. Your schools are no good. You have no jobs. Fifty-eight percent of your youth is unemployed. What the hell do you have to lose?” Trump said during remarks in Michigan in August. (The unemployment rate for blacks ages 16 to 24 in May was actually 18.7%, Politifact found.)

“What do you have to lose” is a risky pitch, carrying as it does the implication that black communities are currently horrible. A former Democratic elected official called it a “clumsy, ham-handed attack.”

“It’s insulting to the intelligence of voters, and clearly it’s not designed to appeal to African-American voters,” the official said. “It’s designed to sort of send a message to his base, that ‘They’re saying I’m ignoring African and Americans and Latinos, but really I’m not.'”

Ben Carson, on the other hand, said that Trump’s comment was about real challenges facing black Americans. “Mr. Trump’s point is that the African-American community has seen high unemployment, practically no economic opportunity and poor educational opportunities,” Carson, who ran against Trump in the primary and now advises him, told TIME in a statement. “Mr. Trump has to go to African American voters and listen to their problems and offer substantive solutions to economic opportunity, school choice and prison reform, to name a few.”

“He isn’t going to concede the African-American vote to Hillary Clinton,” Carson, who also attended Thursday’s Republican Leadership Committee meeting, concluded. ”And [he] will compete to earn the trust and vote of African-Americans.”

But Carson’s point about Trump needing to “go to African-American voters” highlights what has so far been a limit in Trump’s outreach: his appeals to minority voters are taking place in rallies filled with predominantly white crowds. One stop to broaden minority outreach that’s already on Trump’s agenda is Detroit, where Carson grew up. A spokesperson for Carson confirmed that the former neurosurgeon will accompany Trump on an upcoming trip to the city. But Trump declined invitations to speak at both the NAACP and the National Urban League, both of which have drawn GOP candidates and politicians in the past.

Another of Trump’s key pitches to black voters is that he would protect them from crime, an extension of the “Make America Safe Again” theme that he highlighted in his first general election television ad. “It’s a disaster the way African-Americans are living in many cases,” he said in Ohio in August. “We’ll get rid of the crime. You’ll be able to walk down the street without getting shot. Right now, you walk down the street, you get shot.”

Some black leaders, like National Urban League CEO Marc Morial, feel Trump insults African-Americans with his emphasis on violence. “The condemnation of the community, the stereotyping of the community as being crime-ridden … is divorced from reality,” Morial said. “Black America has a set of significant challenges today, but black America has tremendous successes. … The stereotyping is offensive, to say the least.”

Others, like current Democratic Party head Donna Brazile, say all of this is too little, too late, anyway. “Trump’s own words and deeds have made him a singularly unqualified messenger of any sort of reconciliation,” she wrote in an op-ed for USA Today. Quoting Martin Luther King Jr., she continued, “Trump’s support among African Americans will continue to be virtually nil until we see some light and love from his campaign. I’m not holding my breath.”

But Trump says his new strategy is already working. On Wednesday, Trump claimed that his poll numbers with African-Americans have gone “way up” in the past few weeks. A recent NBC News/SurveyMonkey poll found Trump with 8% support among black voters. That is higher than what some other polls have found over the summer, where he’s been hovering between about 1% and 6% black support. (In 2012, Republican Mitt Romney won just 6% of the black vote, according to exit polls.)

For what it’s worth, Trump claims he would win 95% of the black vote if he ran again in 2020, a prediction that made his running mate Mike Pence laugh out loud in an interview. “His optimistic view … that’s pure Donald Trump,” Pence said. 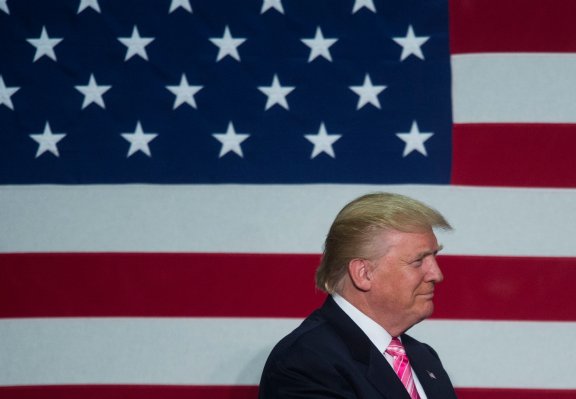