Republican presidential nominee Donald Trump speaks to the crowd at a rally at the Mississippi Coliseum in Jackson, Miss., on Aug. 24, 2016
Jonathan Bachman—Getty Images
By Rishi Iyengar

Donald Trump further stepped up his recent attacks on Hillary Clinton on Wednesday, calling her a “bigot” during a rally in Jackson, Miss.

“Hillary Clinton is a bigot, who sees people of color only as votes, not as human beings worthy of a better future,” Trump said while reading from prepared remarks.

The Republican nominee has repeatedly invoked the “bigotry” of the Clinton campaign in recent days in an attempt to appeal to black and Hispanic voters, but this is the first time he has used the word to reference Clinton herself.

Speaking to CNN shortly after the rally took place, Clinton responded by paraphrasing poet Maya Angelou to argue that “Donald Trump has shown us who he is” and accused her opponent of “taking a hate movement mainstream.”

“Someone who’s questioned the citizenship of the first African-American president, who has courted the white supremacists … is someone who is very much peddling bigotry and prejudice and paranoia,” she added.

At the Mississipi rally, Trump also compared his own campaign to the Brexit campaign in the U.K., subsequently inviting one of its main architects, Nigel Farage, onstage. 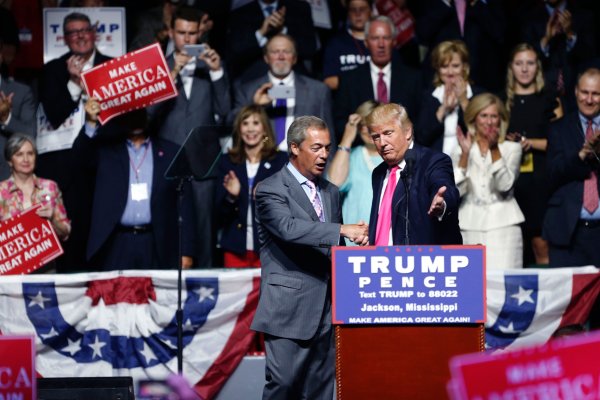 Donald Trump Compares His Campaign to Brexit
Next Up: Editor's Pick