Hillary Clinton said Wednesday that the price of EpiPen is “outrageous” and called on manufacturer Mylan to lower the price of the life-saving device used to treat serious allergic reactions.

“That’s outrageous—and it’s just the latest troubling example of a company taking advantage of its consumers,” Clinton said in a statement. “It’s wrong when drug companies put profits ahead of patients, raising prices without justifying the value behind them.”

The Democratic presidential nominee was responding to price increases of the EpiPen, a preloaded injection of epinephrine or adrenaline that can treat anaphylactic shock. The device has more than quadrupled in the past decade, from $100 in 2008 to its current price of $600.

Clinton joins a bipartisan group of legislators, including Republican Iowa Sen. Chuck Grassley and Democratic Minnesota Sen. Amy Klobuchar, who have called for an explanation or an investigation into the price increase. Mylan CEO Heather Bresch is the daughter of Democratic Sen. Joe Manchin of West Virginia. 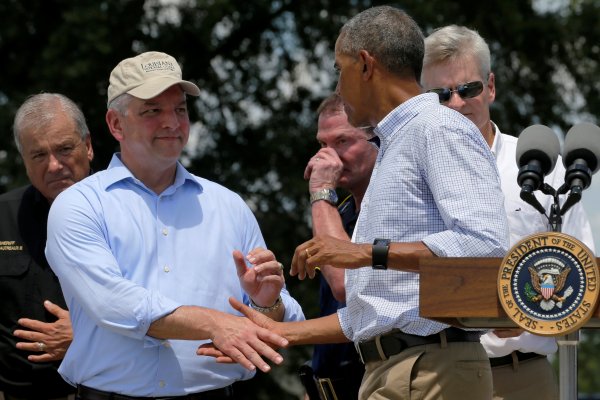 Louisiana Governor: 'Historic' Flooding Is Being Ignored
Next Up: Editor's Pick