Donald Trump has characterized many undocumented immigrants as criminals or as people who take jobs away from struggling Americans. But a new Pew Research poll on immigration policy shows a majority of Americans don’t agree with him.

Here are three areas where the public differs from Trump on immigration:

The new national survey, however, found that 76% of American adults, including majorities of both Democrats and Republicans, think that undocumented immigrants are “as honest and hard-working” as U.S. citizens. Just 24% of respondents said undocumented immigrants take jobs Americans want, compared with 71%, also including majorities in both parties, who said they mostly take jobs citizens won’t do.

Most Americans don’t seem to fear the same violence from immigrants that Trump does. Trump tells stories on the stump of American citizens who were murdered by immigrants; Jamiel Shaw, who Trump often mentions and whose son was murdered by an undocumented immigrant in 2008, even spoke at the GOP convention in Cleveland. “People are getting hurt,” Trump said in a 2015 interview with TIME. “People are being decimated by illegal immigrants. The crime is unbelievable.”

But in the Pew poll, 67% of Americans said that undocumented immigrants are no more likely than citizens to commit serious crimes. There was a partisan difference in the response, but still with majorities in both parties: 80% of Democrats and 52% of Republicans said they didn’t think undocumented immigrants were more likely to commit serious crimes.

However, there was a significant partisan split here. A 63% majority of Republicans and Republican-leaning voters support the wall, whereas 84% of Democrats are opposed to it.

In other words, when Trump appeals to nativism, he is largely speaking to the people who are already in his corner. These new poll results show that to win over more moderate voters, speaking harshly of undocumented immigrants may hurt Trump rather than help.

The Pew Research poll was based on telephone interviews with 2,010 American adults conducted Aug. 9-16, 2016 with a margin of error of plus or minus 2.5 percentage points. The respondents live in all 50 states and the District of Columbia. 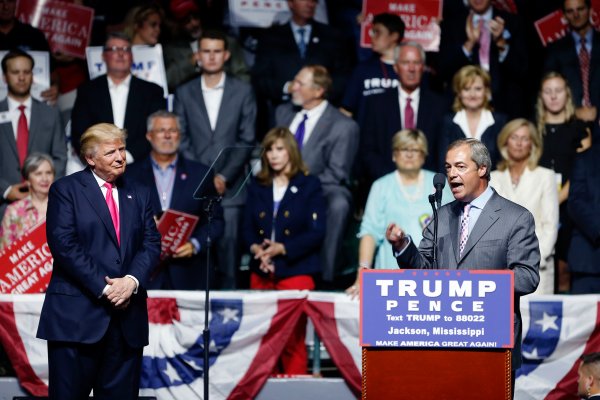 Donald Trump Will Struggle to Reinvent Himself as 'Mr. Brexit'
Next Up: Editor's Pick