Ivelisse, Rebecca and Gina Rodriguez Talk About Their Paths to Success

In the Sept. 5 issue of TIME, we looked at what makes for successful siblings. It is a story about nine American families, including the Rodriguez family, who all saw their children go onto extraordinary success in different fields.

Every night for 20 years, Gino Rodriguez knelt beside his three daughters’ beds and whispered an incantation. As rats the size of footballs skittered along the floor of the basement apartment on the South Side of Chicago, he repeated the same five words into each girl’s ear as she slept: “I can and I will.” The message was always the same, and the audience was always asleep.

“You talk to the subconscious. You don’t talk to the conscious,” Rodriguez says. “That’s the one that really listens.”

The girls slept “hot-dog style,” cocooned in tightly wrapped sheets to keep out the vermin. They occasionally woke up during their father’s nightly pep talks, rolled their eyes and then went back to sleep. But each morning, they did a series of jumping jacks, looked in the mirror and said, “Today is going to be a great day. I can and I will.”

Not all days were great—the family moved from the rat-infested apartment only after a woman was murdered in front of their home. But the three daughters of Puerto Rican parents were kept safe, spending most of their time in school or at the boxing gym where their father refereed. They learned how to block a punch and throw a right hook. They bickered over clothes and went to dance class and dressed up for quinceañeras.

And one by one, they proved their father right: they could and they did. Ivelisse Rodriguez Simon graduated from Harvard Business School and is now a partner at a private-equity firm. Rebecca Rodriguez is the medical director of one of the best family-health clinics in the country. And Gina Rodriguez won a Best Actress Golden Globe for her starring role on Jane the Virgin.

“We lived the idea of the American Dream,” Gina says. “And they made an environment where that was possible.” 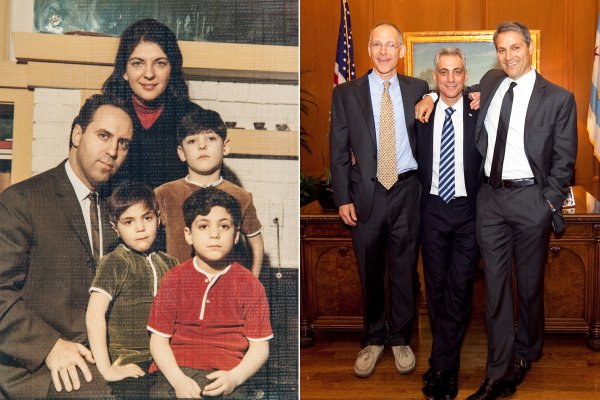 What Rahm, Zeke and Ari Emanuel Were Like Growing Up
Next Up: Editor's Pick