Jorge Ramos: Judgment Day Is Coming For Those Who Stay Silent on Donald Trump

It doesn’t matter who you are—a journalist, a politician or a voter—we’ll all be judged by how we responded to Donald Trump. Like it or not, this election is a plebiscite on the most divisive, polarizing and disrupting figure in American politics in decades. And neutrality is not an option.

The day after the election will be too late. It was too late when we realized that there were no weapons of mass destruction after the invasion of Iraq in 2003. That horrible error of judgment by the Bush administration—and the lack of strength by those opposing the war—cost thousands of American and Iraqi lives. And nobody can even say that we won the war. But hopefully we can learn something from it.

Regardless of whether Donald Trump wins or loses, we will be asked on November 9th: What did you do? Did you support him? Were you brave enough, ethical enough, to challenge him when he insulted immigrants, Muslims, women, war heroes and people with disabilities? Are you on the record correcting his lies? Did you discuss with your friends and family that in a democracy like ours there is no room for racism and discrimination? Or did you just seat idly, silently, allowing others to decide the future of the United States?

Because you will be asked.

Trump has forced journalists to revisit rules of objectivity and fairness. Just providing both points of view is not enough in the current presidential campaign. If a candidate is making racist and sexist remarks, we cannot hide in the principle of neutrality. That’s a false equivalence.

Edward R. Murrow and Walter Cronkite were right; sometimes you have to take a stand. They did it against the dangerous persecutions of Senator Joe McCarthy and in denouncing the pernicious official spin during the worst years of the Vietnam War.

Donald Trump’s candidacy has created the same moral dilemma and sense of urgency. So, yes, when it comes to racism, discrimination, corruption, public lies, dictatorships and the violation of human rights, we have to take a stand.

Politicians have the same responsibility. It is no coincidence that, as the election nears, more and more Republicans are deserting Trump, disavowing his extremist ideas and publicly stating that they will not vote for him.

There have been two crucial moments in which even Trump supporters couldn’t defend their own candidate: when he questioned judge Gonzalo Curiel’s capacity to rule in a case in which he was involved simply because of his Hispanic ethnicity and when he criticized the silence of a Muslim-American woman, Ghazala Khan, who had lost her son, a U.S. soldier, in the Iraq war. Those moments proved to be too much even for the most loyal party members.

Fifty prominent Republicans, who worked with Ronald Reagan and both Presidents Bush, wrote a letter recently saying that Trump’s candidacy was “dangerous.” Others, like Wadi Gaitan with the Republican Party of Florida and Ruth Guerra with the RNC, have quit their jobs because they couldn’t ask Latinos to vote for Trump. And Rosario Marin, a life-long Republican who served as Treasurer with George W. Bush, decided that Trump was too “tyrannical” and decided to vote for Hillary Clinton.

Many Republicans are going through the same process with a broken heart. They clearly dislike Hillary Clinton. Her continuous problems with the e-mails, and the questions about how the Clinton Foundation has operated, only reinforce their belief that she is not trustworthy. But how can they support Trump when he makes irrational and insensitive statements?

Even Trump’s jokes aren’t funny. He suggested that “Second Amendment people” do something about Hillary Clinton (which he later insisted was an attempt to motivate them to the polls, not assassinate her). He claimed his multiple comments accusing President Barack Obama of founding ISIS were “sarcastic.”

Trump, really, is no laughing matter. But he could be the next president. That’s how democracy works.

Judgment day is coming. Will you have peace of mind come November 9th? 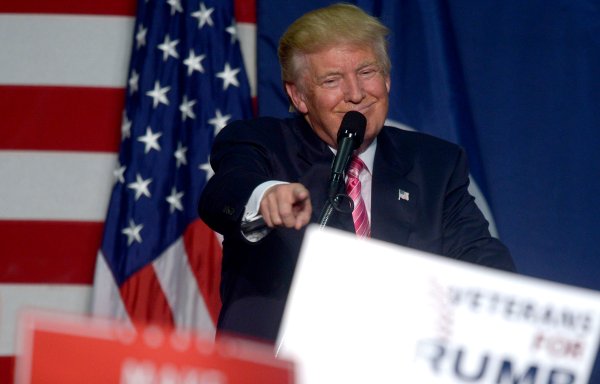 How to Protect the Republican Senate Majority
Next Up: Editor's Pick