Antibiotics Use Linked to Type 1 Diabetes in Mice: Study

Antibiotics are powerful medicines that destroy bacteria, and they’re lifesavers when an infection caused by dangerous microbes needs to be overtaken. But in the U.S., about half of all prescriptions written for antibiotics are inappropriate. The drugs aren’t just overprescribed in adults; one study found that antibiotics are prescribed to kids about twice as often as they should be.

To treat problems from sore throats to acne, doctors expose kids early and often — and scientists have been finding links between antibiotic use and rising chronic illnesses. A new study in mice published in the journal Nature Microbiology finds a link between Type 1 diabetes and antibiotic use.

Blaser has a hunch that the widespread use of antibiotics is driving this increase. In the new study, Blaser and his team took a group of diabetic mice and gave them one of two doses of antibiotics: either a very low dose, which mimicked the amount given to livestock on farms, or a higher dose, the same amount kids typically get to treat their ear or throat infections.

The researchers found that in male mice, the higher antibiotic exposure early in life “accelerated the diabetes and even enhanced it,” Blaser says. About twice as many mice came down with diabetes than in the control group. They didn’t see this effect with the lower dose of antibiotics.

Blaser believes that antibiotics, which wipe out bacteria, are shifting the makeup of the microbiome, a creature’s collection of bacteria in the gut involved in metabolism and immunity. Those changes then affect metabolism to make the mice, or person, more susceptible to diseases like diabetes, Blaser thinks.

Just as the researchers suspected, the antibiotics did change the composition of the microbiome in the mice and the census of bugs living there. They also changed gene expression in the mice’s intestine, “the place where the microbiome meets the body,” Blaser says.

This isn’t the first time researchers have linked antibiotics to poor health consequences. “There’s evidence from epidemiological studies that early life exposure to antibiotics increases risk of inflammatory bowel disease, celiac disease, allergies and asthma,” Blaser says. Another study last year looked at people over time and found that those who developed Type 2 diabetes had taken significantly more antibiotics in their lives than people without the disease. “All of these are pointing to the idea that antibiotics, probably through their actions of perturbing the microbiome, are changing human metabolism and human immunity,” Blaser says.

As for the female mice in the study, the researchers saw mixed effects. More research is needed; mice aren’t the same as humans, so the results can’t be extrapolated beyond them. “We’re studying mice, not children,” Blaser says. “But still we can learn things from studying mice that help inform future trials in children.”

The results suggest to Blaser that doctors should think carefully about whether their young patient really needs a course of antibiotics. “I think we need more careful exams by doctors, and for both doctors and parents to understand that antibiotics aren’t free,” Blaser says. “They carry not only the risk of resistance, which is a cost to the whole community, but possibly health risks to their child.” 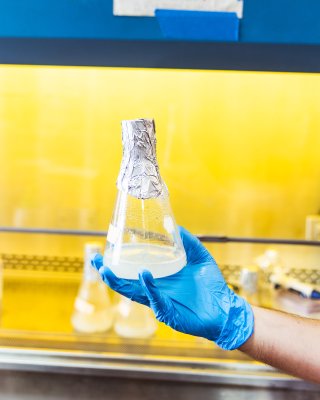 The Price of Insulin Has Soared. These Biohackers Have a Plan to Fix It
Next Up: Editor's Pick