A sack of Syngenta AG bean seeds on a farmer's field near Johannesburg on Feb. 4, 2016
Waldo Swiegers—Bloomberg/Getty Images
By Charlie Campbell / Beijing

On Monday, China National Chemical Corp. (ChemChina) received approval from U.S. national-security officials for its $43 billion takeover of Swiss agrochemical company Syngenta AG. Although the deal still needs to be reviewed by antitrust regulators worldwide, getting the Committee on Foreign Investment in the U.S. (CFIUS) the green light was seen as the final hurdle for what looks like the biggest Chinese overseas acquisition of all time. Syngenta shares jumped 10% upon the news. “The proposed transaction is expected to close by the end of the year,” read a statement by the Basel-based firm, which has 28,000 employees in over 90 countries.

The deal has been controversial in the U.S. for national-security implications. “The fact that a [Chinese] state-owned enterprise may have yet another stake in U.S. agriculture is alarming,” said Iowa Senator Charles Grassley. But the deal has arguably been more controversial in China: Syngenta has pioneered the manufacture of genetically modified (GMO) crops, and ChemChina’s interest is seen as spurred by the Beijing government eyeing Syngenta’s valuable GMO-seed patents. However, the Chinese public remains vehemently against GMO. A recent survey in the state-backed China Daily revealed 84% of respondents consider GMO unsafe. It remains illegal for locally grown food.

Read More: China May Not Have Enough Arable Land to Feed Its People. But Big Changes Are Coming

The Chinese government has launched a massive propaganda offensive to change this. On paper, it is easy to see why: GMO could solve many of Chinese agricultural problems, especially in the arid, freezing north. Chinese farmers are generally poorly trained and work tiny, family plots, overusing fertilizers and pesticides to the point in which land is degraded and water supplies contaminated. In 2007, farmers in southern China’s Guangdong province spread 310 kg of fertilizer per acre, according to the World Bank — six times that was used in the U.S. Experts believe 60%-70% was wasted and ended up polluting water supplies. Despite education programs encouraging farmers to use fewer chemicals, today four out of five underground wells in China produce water unfit even for bathing. As such, the lure of innately high-yield and pest-resistant GMO crops isn’t going away.

China began heavily investing in GMO technology in the 1980s, and has around 10,000 state-employed scientists working on the topic today. At Beijing’s Chinese Academy of Agricultural Sciences, dozens of white coats crowd over petri dishes, seeking to isolate and extract genes that can make crops frost-resistant or thrive on less rain. “Traditional farming has many limitations in China,” says Professor Huang Dafang, who has spent three decades developing GMO. “And climate change has really impeded the development of agriculture in recent years.”

Yet the Chinese public still equates GMO with previous food-safety scares. In recent years, consumers have faced abominations such as cadmium-laced rice, fake eggs and infant formula tainted with the toxic chemical melamine — a scandal that killed six babies and left 300,000 ill. As such, the Chinese Communist Party lacks the necessary social capital to persuade its citizens that GMO is benign. Allegations by the environmental group Greenpeace that GMO crops had been illegally planted in the country’s northeast have further agitated a public wary of stealthy tampering with their food. “The scale of [GMO] contamination is truly shocking,” said Li Yifang, head of Food and Agriculture Campaign.

In many ways, though, GMO has already arrived to China: a large percentage of the soya beans imported are genetically modified, while the vast majority of locally grown cotton — employing more than 6.6 million farmers — is also GMO. But that has not swayed the public. On July 17, Huang was harangued at a public forum on GMO by protesters calling him a “traitor.” It was not the first time. Public figures, like former China Central Television anchor and political adviser Cui Yongyuan, continue to rile against GMO in blog posts. Last week, a Beijing court agreed to hear a lawsuit filed by parents about the alleged use of GMO oil at a school canteen. And reaction to the U.S. regulatory thumbs up did not hint at a softening of stances. “This is an obituary for the Chinese nation,” posted one user to China’s Twitter-like microblog Weibo.

For the Chinese government, CFIUS approval may not be the final hurdle after all.

— With reporting by Zhang Chi and Yang Siqi / Beijing 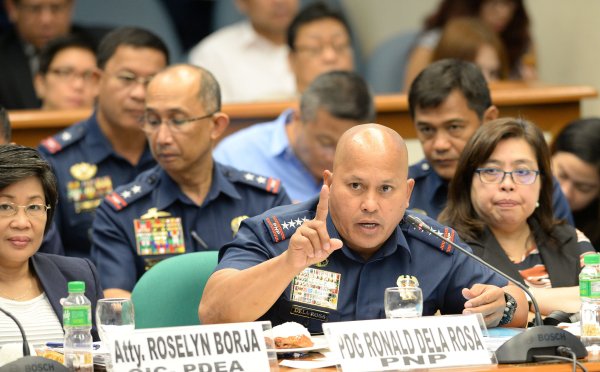 Nearly 1,800 Have Died in the Philippines' War on Drugs
Next Up: Editor's Pick