From Paul Rudd's Tina Turner to Emma Stone's Blues Traveler: A Ranking of the Best Lip Sync Battles Ever

Jimmy Fallon turns 42 Monday and to celebrate, TIME has ranked the very best lip sync battles in honor of the man of the hour. Since 2013, this popular The Tonight Show segment has been satisfying your cravings for seeing Fallon and a celebrity try to out-weird each other by pretending to sing. To celebrate the stars who brought their A-game to the format, here are ten of the most memorable lip sync battle performances in history (of the ones available online,) ranked from entertaining to masterful.

Happy Birthday Jimmy Fallon. We are forever in your debt for all the memories, particularly for the videos that topped this list.

Throughout both songs, he was never not on, and it was thrilling to see the comedian at his most confident. He absolutely killed it with Beyonce’s dance moves for what it’s worth, (at that point zero, because everyone had already parodied “Single Ladies” to death.) But something about this was reminiscent of your friend who secretly thinks they’re just a few YouTube hits away from replacing Mariah Carey.

The first song tapped into your tear ducts, and endearing Ellen found a new way to charm everyone by sing-laughing to Diana Ross. But in the end, she undersold Rihanna’s score-settling “Bitch Better Have My Money.” Oh Ellen, if you want to land higher on these rankings, uncork that oomph everyone knows is inside of you. Everything about Ellen’s Rihanna take may have been undercooked, but watch for her shining moment: her come hither rolling on the floor. Some satisfying lip theater right there.

Rogen is the ultimate lip sync dream because he showed off a brand new side. Once he put on the sweater like his Toronto brethren for Drake’s chart-topper “Hotline Bling,” it was over. He definitely played it safe and had a weak finale, which is why he’s not higher on these rankings, but who knew he could dance without gambling with the air?

How much of a mission impossible would it be to convince you that this guy can still melt your heart? Really impossible actually, but Tommy nailed it. Highlights include Cruise sliding in like he’s about to reprise his Risky Business song, but with pants. Instead, he charms the crowd with a one-man duet of Meatloaf’s “Paradise by the Dashboard Light.” After that untoppable showing, he and Fallon serenade a lucky woman in the audience together Top Gun-style, restoring that loving feeling you felt for the action star.

Everyone knew this athletic Vaudevillian would bust out some James Brown-sized moves, and he didn’t disappoint. His treats included but were in no way limited to: engaging in frequent neck pumping, well-timed mic stand spins, and just generally giving it everything he had from the top. He deserves to be laid down in the finest sheets of linens for his “Tiny Dancer” and a close-up of his hammy face as he breezes through every line of Nicki Minaj’s hyperactive “Super Bass” just sealed the deal.

Based on her appearance on Fallon, it was as though her career full of the smart, alluring girl roles was all just building up to her dream job: a one-woman Blues Traveler cover band. Stone was memorable because she nailed the quick-paced lyrics to Traveler’s “Hook” without missing a beat. She was also memorable because she actually sang. She was really, really memorable because she shut the whole place down with DJ Khaled’s “All I Do Is Win,” powering through Ludacris’s verse with the appropriate combination of sass and nastiness. Fallon called it the best one that had ever been done on the show in 2014, but that was before this next contender.

It wasn’t enough that she gave it to you with DMX’s time-honored power song “X Gon Give it To Ya,” with an impressive amount of heart-thumping miming and power kicks. No. She had to go and sing “Colors of the Wind” from Pocahontas while fake animals flew into her face. Bonus: she sings with all the voices of the mountain even when giant pieces of wind-powered confetti come blasting onto her mouth. You’ve never truly experienced the grandness of this Disney classic until you’ve seen McCarthy fly like an eagle covered in glitter.

There are some displays of rock star fantasies you only see if you walk in on someone dancing like no one’s watching. Rudd dominates this list because he transported everyone to that private moment, with some fantastically awkward faces most people keep to themselves. With two songs uniquely suited to his brand of showmanship (see I Love You Man), Rudd secured this #1 spot. His rendition of Tina Turner’s “You Better Be Good to Me” was so convincing he even mouthed her random diva noises, and he was equally thorough during Queen’s “Don’t Stop Me Now,” tiger clawing and swiveling all over the stage. He wins. 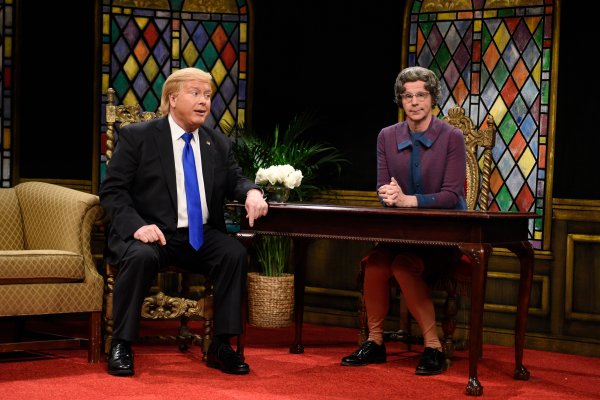