Republican presidential nominee Donald Trump speaks during a meeting with his Hispanic Advisory Council at Trump Tower in the Manhattan borough of New York City on Aug. 20, 2016.
Carlo Allegri—Reuters
By Elizabeth Dias

One of the key leaders listed as part of Donald Trump’s new Hispanic Advisory Council has not actually agreed to the role, citing concerns over Trump’s lack of an adequate immigration policy, even though the official announcement on the Republican National Committee website touted his name. When the council first met in New York on Saturday, Dallas pastor Mark Gonzales was not invited and did not attend.

“I wasn’t aware that I was on any list in that capacity, officially,” Gonzales says. “We are waiting for more details, we want to see what he will do on immigration. … Our stance remains the same, we are willing to serve in that capacity if that takes place.”

Gonzales is the founder of the Hispanic Prayer Network and the Hispanic Action Network, which represent some 10,000 Latino evangelical churches in the U.S. During the 2008 presidential campaign, he chaired the National Hispanic Advisory Council for Senator John McCain. Earlier this August, Gonzales told TIME that he had been invited to be part of Trump’s Hispanic advisory council, but he qualified that he would only consider the position once he had learned Trump’s plan for immigration, in particular how Trump plans handle the undocumented population currently living in the United States.

On Saturday, the Republican National Committee released a statement on its website naming Gonzales as one of two-dozen Hispanic business, faith, and civic leaders on the new National Hispanic Advisory Council for Trump. The move attempts to counter Trump’s unfavorable rating among Hispanics nationwide, which hovers around 80%. The statement specifically highlighted that key Latino evangelical leaders with large networks are ready to act on Trump’s behalf: “Many of these faith leaders represent hundreds of thousands of Hispanic evangelicals nationwide concerned about the direction of the nation, and are prepared to relay Mr. Trump’s message of ending the failed status quo to their congregations and media audiences,” it said.

When asked why the statement included Gonzales, RNC spokesperson Helen Aguirre Ferré told TIME he had not officially been added to the board, and she pointed to a different version of the press release without Gonzales’ name that was emailed to reporters at 7 a.m. on Saturday. However, the press release on the RNC website listed Gonzales’ name as of Monday morning. “I don’t know how that occurred except to say is obviously human error and his name should not have been on there,” Aguirre Ferré, a spokesperson for the RNC told TIME. “We are going to correct it immediately.” Gonzales’ name was deleted without annotation after the conversation with TIME.

This is not the first time that Trump’s outreach has inaccurately claimed the support of pastors to shore up support with non-white racial or ethnic groups. In November, the Trump campaign claimed to win the endorsement of 100 African-American pastors, only to have several announce that they actually had not agreed to endorse Trump, and others, such as prominent Detroit bishop Corletta Vaughn, say they never had even agreed to participate in the meeting in any way. When the meeting actually happened, only several dozen pastors joined, and Vaughn endorsed Hillary Clinton in January.

Cuban-American pastor Mario Bramnick of Miami, a recent Trump surrogate and a chapter director for the National Hispanic Christian Leadership Conference, is on the advisory board, and did attend the meeting. A smaller task force, he says, is in the process of preparing reports for the campaign on immigration policy. “We agreed we need a better legal immigration policy for the undocumented, how that will shape out, I don’t know,” Bramnick said. “We will see the policy develop as we move forward.”

Bramnick adds that Trump told the group he “did not mean all Mexicans are rapists and murderers,” and that his wife Melania is a legal immigrant who has all her paperwork—questions have risen over whether she worked legally in the U.S. as model in 1995. The group, he says, also discussed other topics including the economy and education.

Gonzales says he has raised suggestions with Trump campaign representatives about how to handle immigration in recent months. Gonzales even has a longstanding “Patriotic Immigration” plan for the undocumented population in the U.S. that includes paying a fine and back taxes; getting health, criminal, and background checks; learning English and taking a civic class; and then being put on a pathway to legal permanent residence status after a probationary period. He says he is tired of politicians skirting the issue. “You are saying, I want you to work here, I want to be able to profit off you, but we never want to give you a voice,” he says. “That’s slavery—we don’t do that in America.”

Trump is expected to give an immigration policy speech on Thursday, and Gonzales is still willing to serve on the board depending on what he hears. He routinely votes Republican, and he already supports the GOP nominee because of his positions on Supreme Court nominations, Israel, abortion, and the Johnson Amendment, which would give churches greater freedom to engage in politics. He is continuing to raise support for his coming campaign to increase voter turnout among Hispanic evangelicals, traveling to Arizona and Colorado this week to meet with pastors.

“We are stuck with the Republican nominee this particular election,” Gonzales said. “We are just looking for a glimmer of light come Thursday … If he wants the support of the Latino community in the numbers that he needs to win the election, that is on him.” 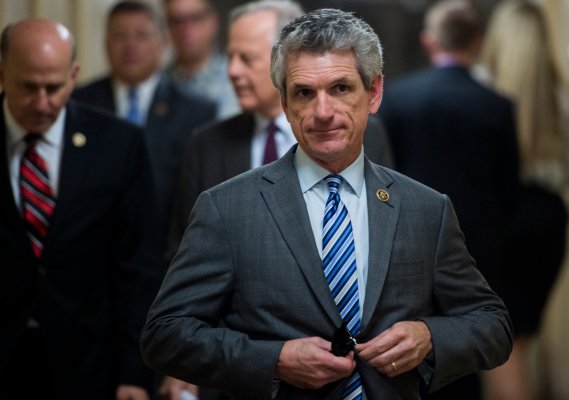 GOP Congressman: I Signed Anti-Trump Letter For a 'Clear Conscience'
Next Up: Editor's Pick