Silver Medalist Feyisa Lilesa: ‘If I Go Back to Ethiopia, the Government Will Kill Me’

Ethiopia's Feyisa Lilesa (silver) crosses the finish line of the Men's Marathon athletics event during the Rio 2016 Olympic Games at the Sambodromo in Rio de Janeiro on August 21, 2016. Lilesa crossed his arms above his head as he finished the race as a protest against the Ethiopian government's crackdown on political dissent.
Adrian Dennis—AFP/Getty Images
By Chris Chavez / Sports Illustrated

RIO DE JANEIRO – Feyisa Lilesa threw up his arms in an “X” as he crossed the Olympic marathon finish line in two hours, nine minutes and 54 seconds and earned a silver medal for Ethiopia. It made up for his country’s disappointment in the event just four years ago, when its three men failed to cross the finish line. Yet given the magnitude of the run, he did not want to talk about athletics in the post-race press conference.

Lilesa was asked about the “X,” a symbol of solidarity with the Oromo people, and he took a moment to inform the international media about the Oromo protests taking place in Ethiopia.

“In the last nine months, more than 1,000 people died,” Lilesa, who is Oromo, said with a whisper outside of the press conference. “And others charged with treason. It’s a very dangerous situation among Oromo people in Ethiopia.”

The Oromo tribe has historically been marginalized by the government, and they are protesting plans by the country and Prime Minister Hailemariam Desalegn that aim to expand the capital of Addis Ababa into Oromia (the country’s largest region), which would displace Oromo farmhands. Protests and strikes started taking place last November but the government dropped the proposal to enlarge Addis Ababa’s administrative boundaries in January.

Reports about exactly how many people have been killed may be hard to come by as the Ethiopian government has some control over media activity within the country. The Human Rights Watch estimated that Ethiopian security forces have killed more than 400 protesters and arrested thousands of others.

Athletes like Lilesa face harsh treatment from the Ethiopian athletic federation for being Oromo. One message that I received even noted Kenenisa Bekele, the world record holder at 5,000 meters and 10,000 meters, may have been omitted from the team for his Oromo ethnicity. Because he spoke out against the government, Lilesa faces an uncertain future.

There is a possibility that his passport might be confiscated by the team coach or an Ethiopian government representative in Rio.

Lilesa has a mother, father, brother, sister, wife and two children back in Ethiopia. After speaking to the media, cooling down from his race and undergoing drug testing, Lilesa plans to call his family from his hotel. Admittedly, he said he does not know if they were arrested while he was speaking out to the media.

“When somebody knocks on your door, you suspect who comes,” Lilesa says. “Soldier or people.”

At the moment, he says that he does not have another visa and maybe wants one to stay in Brazil for some time. He also raised the possibility of moving and working in Kenya, where he called the people “friendly.”

“If I can get visa, I can move to America,” Lilesa says.

American marathoner Meb Kelflezighi, who finished 33rd at the age of 41, was on his way out of the stadium when I informed him of Lilesa’s situation. He can relate as his family left Eritrea when he was 12 years old.

“I have relatives that have lost lives,” Keflezighi says fighting back tears. “You do the best that you can for your house. I do the best that I can for my house and my wife. You take that detail and apply it to the masses. Some things are not in our control. There needs to be a collaboration and diplomacy to make the world a better place. Humanity is very important in our society whether you are in North America, South America, Africa or anywhere else.”

Outside of the stadium, a few spectators (some with media credentials around their neck) snapped photos with Liles as he crossed his arms. They imitated the pose possibly not knowing of the significance. One even asked about it. When Lilesa steps on the podium at the closing ceremony at the Maracana on Sunday night, he will cross his arms in the “X” again and the meaning will again be questioned.

“Have you always been this brave?” one reporter asked Lilesa.

His English is fairly good, yet he could not comprehend the word “brave.” For now, he embodies it. 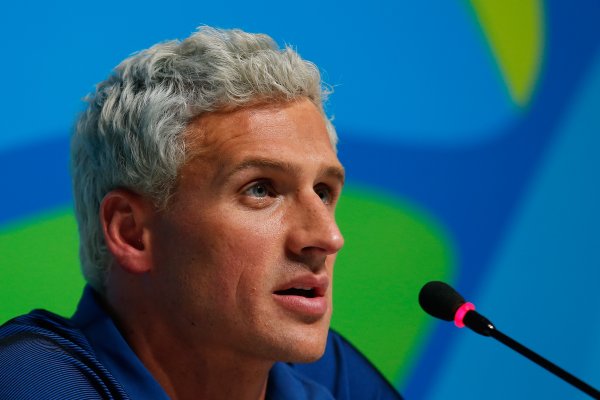 Ryan Lochte on Rio Robbery: 'I Overexaggerated'
Next Up: Editor's Pick