The 9 Craziest Things I Saw at the Rio Olympics

The coach of Mongolian wrestler Ganzorigiin Mandakhnaran takes off his clothes as he protests after the men's freestyle 65-kg bronze-medal match against Ikhtiyor Navruzov of Uzbekistan at the Olympic Games on Aug. 21, 2016
Toru Hanai—Reuters
By Sean Gregory / Rio de Janeiro

Put the 2016 Olympics in the books. The Rio Games have offered world records, graceful moments, crushing losses — and no shortage of nuttiness. Here are nine of the craziest moments from Rio:

Neymar!
Rio exploded after Neymar scored the winning goal, in a penalty shootout, against Germany on Saturday to give Brazil its first Olympic gold medal in soccer and giving the nation a degree of vengeance following its 7-1 humiliation at Germany’s hands in the 2014 World Cup semifinals. One of my favorite memories from these Olympics will be the subway ride afterward from the Maracanã Stadium. After enduring countless packed, hot and miserable subway rides in New York City — and more than a few interminable, traffic-clogged bus trips in Rio — to be traveling with so many joyous fans, wearing Brazil green and gold, on a cool, efficient train was a rare treat. One car down, dozens of fans jumped up and down, singing songs, nearly hitting their heads against the roof. The entire subway bounced. I didn’t mind.

The Lochte Whodunit
Approaching a Rio police station on Aug. 18 for a press conference called by Brazilian law enforcement to offer an alternate version of events in the sensational Ryan Lochte robbery story, the mob of cameras called to mind the fever-pitch coverage of the O.J. Simpson case. Photographers from around the world pressed their lenses against the station windows, trying to snap a shot of U.S. swimmers Jack Conger and Gunnar Bentz, who were inside giving statements after being pulled off their flight home the night before. A very kind police press spokeswoman, who struggled a bit with her English but went out of her way to assist the American contingent, announced that a press conference with two law-enforcement officials would be moved across the street to a theater. The throng paraded to the theater. The room was so packed that many reporters had to sit on the floor, like kindergarteners at show-and-tell. The Olympics always throw a curveball: I never expected to be spending an afternoon standing shoulder to shoulder with colleagues in a Rio theater listening to cops, in Portuguese, explain how U.S. swimmers fabricated a robbery story. “Great story, great story,” a theater worker said to a group of American journalists. “That’s why you’re so good at the movies.”

Bolt’s Last Lap
Usain Bolt is very popular: this isn’t news. But having covered all nine of Bolt’s Olympic gold-medal winning races, his royal treatment in Rio was noteworthy. Fans here held him in the same regard as a political revolutionary, chanting his name as if he were leading their party. In Rio, Bolt made clear he’s sports royalty on the level of Muhammad Ali or Pele. About an hour after he finished his Olympic career by anchoring the Jamaican relay team to a 4×100-m gold, a few hundred fans hung around the lower decks, snapping pictures of Bolt conducting television interviews. Someone passed Nugent Walker, Bolt’s manager, a Bolt doll. Toy Bolt was doing his “to the world” lightning pose. A piece of paper was attached to the doll. On one side, the writing said, “Happy Birthday Bolt.” On the other side, it said, “See You in Japan Bolt.” The Jamaican superstar has insisted these Olympics are his last. The fans in Rio didn’t want to believe it.

Copa Goes Crazy
I was skeptical whether beach volleyball, played in a stadium erected on Copacabana Beach, would deliver on its promise as the party event of the Games. Boy did it. The festive atmosphere, sweeping beach views and blaring music made it electric, especially when Brazil competed. No opportunity to was left untapped. After an athlete, especially a Brazilian player, spiked the ball, you all too often heard, “HERE COMES THE BOOM! HERE COMES THE BOOM! HERE COMES THE BOOM BOOM BOOM!” The crowd then waved their arms in unison and dancers ran out to the sidelines, shimmied about and then raced back to their corner. Same thing, different words, after a block: “MONSTER BLOCK! MONSTER BLOCK! MONSTER MONSTER MONSTER BLOCK!” Imagine if a football stadium rocked out to “COMPLETED PASS! COMPLETED PASS!” on a basic first down screen play. Brazil does love its volleyball, the second most popular sport in the country after soccer. Perhaps too much.

Diving for Gold
The women’s 400-m final on Aug. 15 was coming right down to the wire, with American Allyson Felix gaining ground on Shaunae Miller of the Bahamas. Would Felix run out of room before catching her? No one expected what came next: Miller dove headfirst at the finish, like a baseball player taking second on a steal attempt, to beat Felix by .07 seconds. I watched the replay many times, and am convinced Miller didn’t need to risk breaking limbs to beat Felix (the move, by the way, is perfect legal). Luckily for Miller, she escaped with a few cuts and bruises: after the race, you could see a little blood on her right hip. Hopefully, she doesn’t inspire copycats at high school meets across the world.

Ain’t No Party Like a Holland House Party
Most of the big Olympic countries find space for a “national house” in the host city, a place where their athletic federation and corporate sponsors can host events, parties and let athletes and their families unwind. It was at France House, for example, where Lochte and his swimming teammates wiled away the night before their fateful gas station incident. But no one tops the Dutch in Olympic nightlife. The Holland Heineken House is always an attraction, and things get particularly crazy when cyclists win medals. On the night of Aug. 10, hundreds of orange-clad Netherlands supporters crowded into the Rio venue to fete Anna van der Breggen, winner of the women’s road-race gold medal and a bronze in women’s time trial, and Tom Dumoulin, who won silver in men’s road race. A live band took the stage, and the crowd parted so the medalists could take a ceremonial walk through the area. Then what I can only describe as a rave broke out.

They’re Lovin’ It
I know the fries are free. Athletes complained about the food in the dining hall. But I still don’t know why so many of the world’s fittest humans, after years and years of training for this singular moment, would chow down on McDonald’s before their competitions. The long lines became a source of comedy — a Montenegrin water-polo player publicly apologized to his coach while waiting for a Big Mac — and irritation. “Oh my God, it pisses me off,” said Kayla Harrison, who won her second straight gold medal in judo. “It’s insane. We went and stood in the line for 10 minutes, and we were like, ‘O.K., we’re not doing this.’ People were walking by with three bags. They must be like, ‘I’ll have 24 cheeseburgers.’”

Racing the Wind
Do you call it a relay race when the other lanes are empty? Well, at least the American women’s 4×100-m team was trying to beat the clock. The Americans ran a strange solo semifinal the night of Aug. 18 because earlier in the day, a Brazilian runner bumped Allyson Felix before she stumbled and threw the baton to English Gardner; the baton fell to the ground, seemingly ending their chances of defending the team’s 4×100-m gold from London. But the U.S. filed a protest, which the judges accepted, ruling that Felix indeed was impeded. The team reran their semi that evening, on an empty track. As long as the Americans finished better than 42.70 seconds, they’d advance to the final the next night. Anchor Morolake Akinosun crossed the line in 41.77 seconds, tops among all qualifiers. China got bumped from the final. The Americans won gold the next night. Felix now has six gold medals, more than any women’s track athlete in Olympic history. She’s as measured as they come, but appears twice on this craziness list. Weird.

A Colorful Ending
This one, I’ll admit, I didn’t see live with my own eyes. I was covering the U.S. men winning their third straight basketball gold, meanwhile in a fit of protest the Mongolian wrestling coaches strip out of their clothes to protest the results of a bronze-medal match, which Mongolia’s Ganzorigiin Mandakhnaran lost to Uzbekistan’s Ikhtiyor Navruzov. But how can you not include that on a list of the craziest moments? Just as the Summer Olympics were starting to pack up for four years, a strip protest wins the day. It was a fine ending to a memorable Olympics. 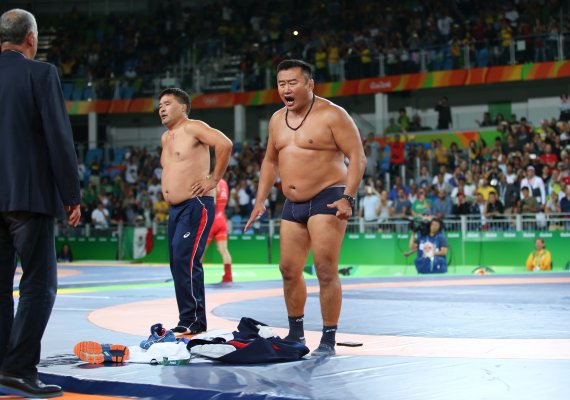 Mongolian Wrestling Coaches Strip in Protest After Rio Loss
Next Up: Editor's Pick