As a country, India punched well below its weight at the Rio Olympics. By Aug. 20, the sprawling nation of 1.3 billion had won just two medals, placing it below the likes of tiny Lithuania and struggling Venezuela, which is currently in the throes of a severe economic collapse.

The result is unsurprising. On average, India spends around $0.005 per head on sports each day, against $0.30 for the U.S., according to a recent Indian parliamentary report. And outside cricket, a game followed with almost religious fervor in India, there is little private investment in sports, discouraging participation. As the report noted, most athletes are wary of pursuing their discipline professionally “because of high risk, uncertainty and low rewards.”

Indian officials, meanwhile, made some embarrassing headlines as the Olympics got under way: the Indian Sports Minister’s entourage in Brazil was reportedly reprimanded for bad behavior, while a provincial political leader faced widespread criticism for going on a pricey taxpayer funded jaunt, along with eight other colleagues and bureaucrats, to watch the Games. (His defense: he was there to “stand by our players” and see what problems they face.)

And yet, as the Rio Games come to a close, the headlines in India reflect an unexpected burst of national pride. The reason? The success of India’s sportswomen.

For a country that is too often in the news for the daily violence and social challenges faced by its women, a series of world-class performances by India’s female athletes has created a new generation of national icons. India owes both its medals to women: the wrestler Sakshi Malik, whose bronze-winning performance opened India’s account at the Games, and P.V. Sindhu, whose stunning silver-winning slams in the badminton singles final against Spain’s Carolina Marin kept the entire country on the edge of its seats until the very end.

They weren’t alone. Dipa Karmakar missed out on a medal but won hearts across the subcontinent with her performance in the gymnastics contest, coming fourth in the individual vault final. Her colleague Lalita Babar became the first Indian woman to qualify for an individual Olympic track event final since 1984. Another star in her field: Aditi Ashok, an 18-year-old from the southern city of Bengaluru, the youngest contender in the women’s golf contest.

Their successes have won them the adulation of millions and turned a spotlight on the high barriers, both social and institutional, they had to overcome to even make it to Rio in the first place.

Take Karmakar, the first Indian female gymnast to compete at the Olympics. In the run-up to the Games, India’s sports mandarins reportedly denied her request to have her longtime physiotherapist accompany her to Rio, rebuffing her, according to one account, with a terse, “You’re going alone, why do you need a physio?” He was only rushed there at the last minute when she qualified for the final.

For Babar, becoming a professional sportswoman was in itself a victory against the odds. Hailing from a poor, drought-prone region of western India, Babar’s decision to pursue running was initially met with opposition from her family, which worried about the economic costs of her choices. As her father told local media: “Our main concern has always been about inadequate rain as it affects our crops. We thought Lalita’s decision to make a career in sports would be an economic burden on the family.”

Babar also had to overcome the gap in institutional support faced by Indian athletes. Speaking to an Indian network last year, as she prepared for Rio, she revealed how she had had to turn to a private donor to buy the running shoes needed to train for the Olympics. “The government doesn’t provide us with shoes, we have to buy on our own,” she explained. And getting the right shoes is not easy. “In India, we don’t get special shoes for [the steeplechase event, which calls for a particular set of running spikes]. We have to order from abroad. One spike lasts only one month. We order five to six pairs at one time because we can’t take a chance. We have to alternate between pairs. In a week, we alternate between three pairs so that they last long.”

India’s wrestling medalist Malik, meanwhile, belongs to Haryana, a northern state notorious for its lopsided gender ratio. The last national census showed that for every 1,000 boys aged up to 6 years old, the state had an average of just 834 girls, an imbalance blamed on prenatal sex screening and female feticide, still prevalent despite ongoing government efforts to stamp it out. (More recent statistics suggest an improvement overall, but the situation in some pockets has worsened.)

Recalling his daughter’s choice to pursue wrestling when she was still a young girl, her father told a local newspaper about the dismissive attitude of his friends and neighbors, who asked: “Will girls also wrestle now?” “Yes, there were people who objected to a girl learning to wrestle,” Malik’s mother Sudesh added. “But she wanted to be a wrestler and we did not want to come in the way of her dreams.” The support paid off, for Malik — and for India.

Correction: An earlier version of this story misstated the amount per head that the U.S. spends on sports each day. It is 30 cents. 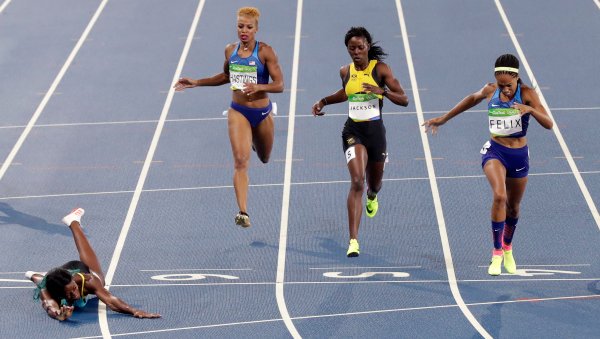 Here Are Other Athletes Who Famously Won with a Dive
Next Up: Editor's Pick