Ryan Lochte on Rio Robbery: 'I Overexaggerated That Story'

In his first interview since it was revealed that his story about being held at gunpoint in Rio was untrue, Ryan Lochte said he “overexaggerated that story.”

“If I had never done that, we wouldn’t be in this mess,” Lochte told Matt Lauer in an interview that aired on NBC on Saturday. “None of this would have happened.”

While Lochte admitted that he inflated the robbery story, he remained adamant that he had been out of sorts after a gun was pointed at him and three other American swimmers — Gunnar Bentz, Jack Conger and Jimmy Feigen. Pressed by Lauer to acknowledge that he was not a victim of a robbery, as he had initially and insistently claimed, Lochte said, “It’s how you want to make it look like. Whether you call it robbery, whether you call it extortion or us paying just for damages — we don’t know. All we know was a gun was pointed our direction and we were demanded to give money.”

Originally, Lochte told NBC’s Billy Bush that he and the three swimmers were in a taxi headed back to the Olympic Village from a party at France House when they were pulled over by thieves impersonating police, who pulled guns and demanded they get on the ground and relinquish their money.

That version of events soon unraveled, and on Saturday, Conger offered another version of events. In a statement, Conger said that the group pulled into a gas station in order to use the restroom. Instead, they ended up relieving themselves against a wall, and Lochte damaged a sign, Conger wrote. When confronted by armed security to pay for the damage, the group offered $20 in U.S. currency and about $33 in Brazilian reais.

While he said, “I’m taking full responsibility” and admitted that “I definitely had too much to drink that night,” Lochte stopped short of fully explaining why he fabricated the story about being randomly targeted and held up at gunpoint.

That remains a glaring omission in this strange tale, which has been seen as a slap in the face in a country sensitive about its reputation for crime and proud of its general ability to keep it at bay during the Olympics. Lochte’s antics and misleading attempts to explain it also detracted attention from the achievements of his fellow Olympians, particularly the U.S. swimming team’s extraordinarily strong run in Rio. He expressed contrition, but stopped short of full culpability.

In a statement posted earlier on Twitter and again in his NBC interview, Lochte apologized for that distraction. “They put on a great Games,” he said. “My immature, intoxicated behavior tarnished that a little.”

To his fellow athletes, he said, “I took away from their accomplishments, and that’s what I think hurts me the most.”

More of the interview will air on NBC’s Today show on Monday. 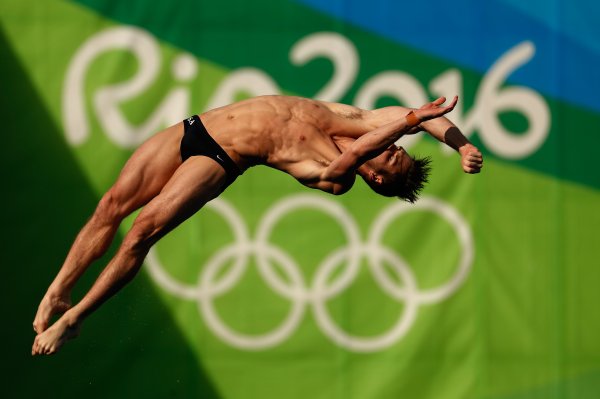