No one has a better view of Olympic Park than a diver. Towering 10 meters above the water, the platform offers an unparalleled view of Lagoa de Barra, the lake adjacent to the Park and the Olympic Village beyond.

But the 12 men in the 10m platform final likely weren’t even paying attention to their unique vantage point. Instead of looking out beyond the Maria Lenk Aquatics Center, they were looking down, at the now crystal-blue water below that was pockmarked with the steady drizzle of a dampening rain. Just days before, the diving well and the practice pool adjacent to it in the open-air center had turned a disturbing emerald green, the result, Olympic officials said, of an accidental overdose of hydrogen peroxide. After being drained and re-filled, the water regained its normal aqua hue in time for the final diving event of the Games.

Under a constant drizzle that sent most fans under cover of umbrellas or plastic ponchos at the start of the competition, the divers seemed unfazed by competing with the weather.

After six rounds of dives that saw Chinese favorite Qiu Bo falter and Mexico’s German Sanchez surge, Aisen Chen of China secured gold, while Sanchez dove to silver and the U.S.’s David Boudia won bronze. It’s the second gold for Chen in Rio; together with partner Yue Lin, captured gold in the synchronized 10m platform during the first week of competition.

In diving, it’s all about the right dive at the right time, with one bad leap off the platform could mean the difference between a medal and going home empty.

Boudia earned two perfect scores, 10.0, on his second round inward three and a half somersaults in the tuck position while But Qiu, the silver medalist from 2012, overextended after opening up from his back triple somersault pike to earn 4.5s across the board, which landed him in last place after the round.

Qiu bounced back with a sweep of three 10.0 scores for his third dive, a reverse three and a half somersault in the tuck position, which pulled him up to sixth place after the round. German Sanchez from Mexico began making his bid for the podium with the second highest score of the round.

For his final dive, Boudia threw off the same skill as Chen had in the previous round; while tight in the air, it wasn’t as clean on the entry and earned him 6.0s and a 6.5. Sanchez answered back with scores of 8.0 which pulled him ahead into second place, in front of long-time friend Boudia. Chen finished off with a perfect back two and a half twists and two and a half somersaults and disappeared into the water on his entry to clinch the gold with three perfect 10.0s.

“It’s easy to be discontent with the result,” said Boudia. “Missing my last dive which has been a strength of mine, at the Olympics; it was almost mine to lose. But to know that I could miss this dive and become the bronze medalist at the Olympic Games is pretty special.”

Finishing on the podium for Boudia, who recently detailed his struggles after finishing fifth at the 2008 Beijing Games in the 10m platform in his memoir, Greater Than Gold, wasn’t necessarily a disappointment. He admitted to having suicidal thoughts after leaving Beijing without a medal, but credits religion with helping him to earn gold in 2012 and stay on the podium in Rio. Training for Rio as the defending champion was also a strain, he said. “This [medal] is a lot more special because the past four years has been extremely difficult,” he said. “The road — getting married, having my first child with my wife, and trying to defend the gold — the pressure that comes with that is not easy.”

No one is more familiar with that than Tom Daley of Great Britain, the 2012 Olympic silver medalist, who notable for his absence. After finishing first in the preliminary round the previous day, Daley finished last among the 18 in the semi-finals after faltering on his second (a forward three and a half somersaults with a twist) and third (an armstand to back three somersaults) dives, among the most difficult ones he performs. Only the top 12 move on to the finals.

“I really don’t have a reason,” he said of his missed dives in the semi-final round. “I’ve been diving like I’ve been diving [in the preliminaries] for the last three weeks leading up to this and that’s why it’s so hard to take in. It’s just really tough to think how well it went yesterday and if I’d just done that 24 hours later, managed to do it in the final, it could have been an Olympic gold medal around my neck, but instead it’s heartbreak.”

Daley, along with Boudia, have been challenging the Chinese dominance in the event. At last year’s world championships, Boudia earned silver and Daley bronze behind Qiu, while Boudia bested Qiu at the last Olympics in London and Daley came in third. “I’m kind of in shock because I know that I could win that gold medal and I think right now I’m the only one that could challenge the Chinese for that gold medal,” Daley said after missing the chance to dive in the finals.

Daley has now missed out on Olympic gold three times; in 2008, he finished eighth.

Qiu, 23, from Beijing, has won the last three world championships in the event, while Chen, after winning gold in the synchronized event, was in the zone. Executing their dives with the crisp precision and tight tucks that have become the hallmark of the Chinese team, Chen also capped off the spectacular show of acrobatics with near splash-less entries, another points-getting technique he and other Chinese divers have mastered.

“We don’t have a strong religion in China so people who win gold medals are our gods; they are our heroes,” says Peng Hao, a photographer from Chengdu, China who traveled to Rio to see the Games. “We will remember them forever.”

What’s behind their ability to conquer the art of flinging yourself into space before plunging into a pool? Zhuqiao Li, also from Chengdu, has a theory. “I think diving is suitable for Chinese,” she says. “The Asian body is not suitable for running because we are smaller than Europeans so maybe in diving we have an advantage.”

Divers in China also have the opportunity to become superstars in their country, Advertisers find medalists attractive, and they often find their images gracing the opening screen of smartphone apps. Chen will likely find his image appearing in quite a few of those in coming months. 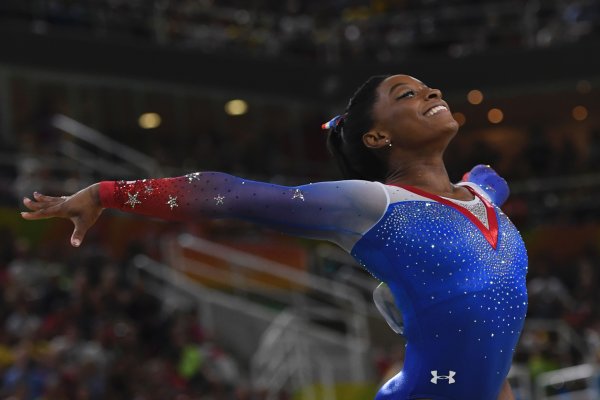 Simone Biles Will Carry the U.S. Flag at the Olympic Games Closing Ceremony
Next Up: Editor's Pick