Germany celebrates after a goal by Linda Sembrant of Sweden puts them 0-2 into the lead during the Women's Olympic Gold Medal match between Sweden and Germany at Maracana Stadium on August 19, 2016 in Rio de Janeiro, Brazil.
Patrick Smith—Getty Images
By Sports Illustrated

Germany has won its first Olympic gold medal in women’s soccer after defeating Sweden 2-1 in a tense final at the famed Maracanã Stadium in Rio de Janeiro.

Dzsenifer Marozsan scored a fantastic goal and had a hand in an own goal to account for Germany’s scoring, while Sweden pulled one back through Stina Blackstenius and threatened late, but couldn’t quite find an equalizer and settled for the first silver medal in its nation’s women’s soccer history.

Germany sends iconic former player and manager Silvia Neid out as a gold medalist, as it was her last match managing the national team.

Sweden was expected to opt for the same defensive, organized tactics that have seen Pia Sundhage’s side shock the USA and Brazil in penalty kicks in the quarterfinals and semifinals, respectively–while also prompting some harsh critics, most notably USA goalkeeper Hope Solo. It came it with a more attack-minded approach, though, even having more than half of the possession in the opening half.

Even so, it was Germany that nearly struck first, as Anja Mittag nearly scored in the 25th minute, but she somehow pushed a rebound off a saved shot right in front of the goal wide of the target.

Germany did manage to open the scoring just after halftime on a gorgeous goal from Marozsan. She had a failed clearance attempt fall right to her at the top of the and curled a right-footed attempt by diving Sweden goalkeeper Hedvig Lindahl in the 48th minute. It was her first goal of these Olympics.

Marozsan played a part in doubling Germany’s lead just after the hour mark. Her free kick hit off the post and redirected right to defender Linda Sembrant, who could do nothing but put the ball in her own net for an unfortunate own goal.

Sweden sliced the deficit in half in the 66th minute, as Blackstenius, who scored against the USA, one-timed Olivia Schough’s cross to make it 2-1.

Sweden’s late pressure came up short, though, as Germany’s women finished off the victory and rushed the field in celebration.

In the bronze medal match, Canada took third for a second straight Olympics, defeating Brazil 2-1 on goals from Deanne Rose and Christine Sinclair. Beatriz’s late goal was nothing but consolation for the hosts, which settled for fourth after galvanizing its nation throughout its deep run. 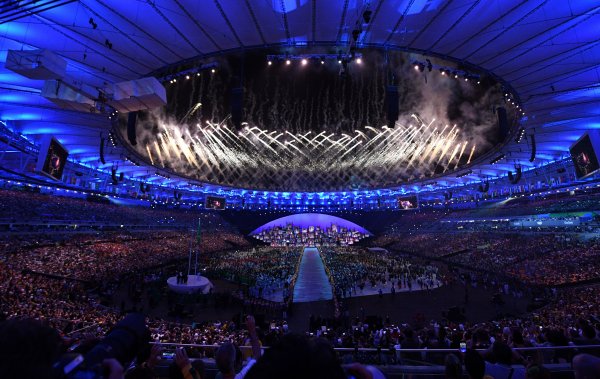 How to Watch the 2016 Rio Olympics Closing Ceremony
Next Up: Editor's Pick