President Obama to Visit Louisiana on Tuesday After Devastating Floods

President Obama will visit Louisiana on Tuesday in the wake of severe flooding in the state, the White House has announced.

At least 13 people have died and tens of thousands have been displaced by the floods. The White House said in a statement that Obama has received regular updates on the situation while on vacation in Martha’s Vineyard, and has worked with Louisiana officials to determine the best time to visit and decided on the Tuesday trip to Baton Rouge. “The President is mindful of the impact that his travel has on first responders and wants to ensure that his presence does not interfere with ongoing recovery efforts,” the statement reads. “He is also eager to get a first-hand look at the impact of the devastating floods, hear from more officials about the response, including how the federal government can assist.”

Donald Trump toured the state on Friday to mixed opinions: While some welcomed the Republican candidate and saw his visit as a sign of caring, critics (including those in Louisiana Governor John Bel Edwards’ office) saw it as a photo op.

According to journalists on the scene, Trump took a swipe at President Obama for his absence. Former Senator Mary Landrieu said she hoped Obama and Democratic candidate Hillary Clinton would follow in Trump’s footsteps and pay visits as well. 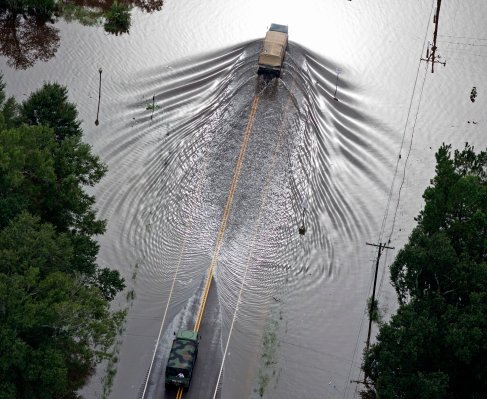