The Mysterious History Behind Humanity's Love of Dogs

Dogs were the first animals to be domesticated, with evidence suggesting they were tamed about 15,000 years ago. But the history behind how the four-legged creatures went from wild wolves to pampered pets remains hazy, scientists say.

“It’s a puzzle,” said Dr. Greger Larson, a professor of evolutionary genomics in the archaeology department at the University of Oxford in England. “Rather than thinking about it as an event or a single overnight incidence, it’s a long-term multigenerational change.”

Larson, 42, is part of an international team of scientists working to nail down when, where and how many times dogs were domesticated—all questions that experts agree that, well, they just can’t agree on yet.

“There’s a heck of a lot of speculation. The field really lacks a consensus,” Larson said in a recent interview with TIME. “There’s still a heck more that we don’t know. You need a lot of information from a long time ago, and it’s tough to really get that.”

The latest theory is that the domestication of ancient wolves may have taken place in both Asia and Europe, with about 1,000 to 2,000 years between the two instances, according to the team’s research, which was published in the journal Science in June.

The research involved scientists poring over canine fossils and modern DNA samples. It found a deep split between modern East Asian dogs and those from the Middle East and Europe. The divide may have taken place between 6,400 and 14,000 years ago. The hypothesis is significant, according to Larson, because the dual domestication—something unlikely to have happened randomly—suggests that external factors may have forced wild and often aggressive wolves to forge a working relationship with humans for survival.

“We’re, so far, in the beginning of this,” Larson said. “If it happened just once, you’re kind of thinking it’s a lucky happenstance in space and time. If it happens twice, independently, on two different sides of the old world, then you’re looking at an environmental driver.”

Among some possible scenarios: Wolves may have been trying to take advantage of resources humans had at the time, or humans may have just been introduced to the animals in an area in which they didn’t previously live.

Scientists agree that wolves began associating more closely with people about 15,000 years ago. Around that time, people were burying dogs, which could be taken as a possible sign of affection. Sometimes, canines were buried alongside humans, evidence shows. Dogs were considered an important member of the human family, helping people hunt, about 8,000 years ago.

Ultimately, that relationship led to the idea of dogs as pets—tamed animals kept for companionship inside the home—which can be seen as early as 2,000 years ago during the Roman years, Larson said.

Now, nearly 78 million dogs are considered pets in the U.S., according to the American Pet Products Association. About 44% of all households in the country have a dog, the organization said.

“We have a long-term relationship with dogs,” Larson said. “They’re our oldest friends, if not our best friends.” 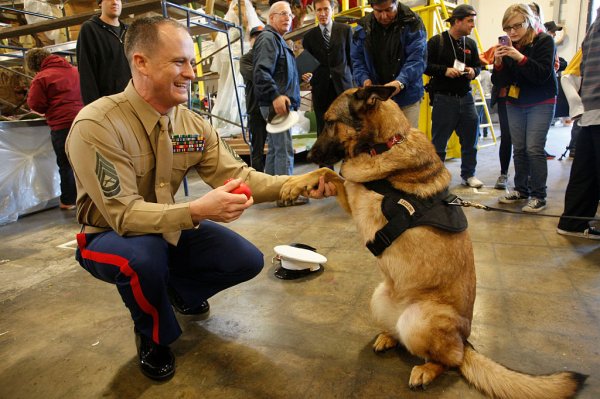 Here Are 10 Hero Dogs to Celebrate on National Dog Day
Next Up: Editor's Pick