Two days before John Krasinski had to submit the final cut of his sophomore directorial feature, The Hollars, to Sundance, his good friend Tom McCarthy watched the movie. McCarthy—who directed and co-wrote last year’s Best Picture Oscar winner Spotlight and whose advice, consequently, is probably worth listening to—told Krasinski, “You end every scene perfectly.” To which Krasinski responded, “Thank you.” To which McCarthy shook his head. “You don’t want to do that.”

The Hollars (Aug. 26) is a dramedy about a messy family. The mom (Margo Martindale) is headstrong and has for years been ignoring symptoms of a brain tumor, the discovery of which sets the story into motion. The dad (Richard Jenkins) is reduced to a walking puddle of tears, the big brother (Sharlto Copley), divorced, unemployed and directionless, and the younger brother (Krasinski), professionally stunted and terrified of impending parenthood with his pregnant girlfriend (Anna Kendrick). A family this messy—which is to say, most of them—does not call for neat little bows.

It was this messiness that attracted Krasinski to the project, in which he initially planned only to star. But when the movie, written by Jim Strouse, looked like it might be headed to the place where unfunded indies go to die, Krasinski stepped in to direct and produce. He wasn’t sure he would go through with it, though, unless he could properly cast it. So he called up Martindale and asked her if she remembered him.

Krasinski had met Martindale on his first acting job, a Marshall’s commercial he did at age 13. Martindale, he recalls, “was the very nice lady getting some very reasonably priced handbags.” The way she treated him on set made him go home to his mother that night and declare that rumors of a cold and cutthroat Hollywood must certainly be false. As he got older, he came to recognize the actor—whose recent credits include The Americans, The Good Wife and Justified—as not just a nice person, but one of the great character actors of our time. Thankfully, Martindale did remember her young costar, and agreed to be in his movie.

The Hollars is Krasinski’s second effort as a director (his first was the 2009 David Foster Wallace adaptation Brief Interviews With Hideous Men), and he’s acted in both. While some directors find it difficult to dissociate their director-selves from their actor-selves in a given scene, Krasinski says acting in The Hollars was crucial. “As an actor and a director, you’re looking for the same thing,” he says. “You’re looking to be moved, and I knew it just by standing next to them.”

Krasinski was compelled to make a movie about family ties before his first daughter was born in 2014, but her birth four months before filming transformed the experience. “To say that my understanding of the movie changed would be the biggest understatement of the year,” he insists. “There’s an existential magnet to family, and that’s what I hope people get from this. I’m not saying you have to love your family or that family’s not complicated, but there’s something beautiful about a group of people you’re from. That’s your origin story. I just had this whole new understanding of my parents and my brothers, and now my daughters.”

Their origin story, of course, includes Krasinski’s wife Emily Blunt, who stars in this fall’s buzzy psychological thriller The Girl on the Train, which he unhesitatingly deems “the best thing I’ve ever seen her do.” They will appear together—or at least, be heard together—in next year’s animated film Animal Crackers, and Krasinski says they hope to be colleagues again in the future. “We’ve always talked about doing a movie or a play together. We just don’t want the idea of us being married to supercede the movie, so we have have to find something that’s that specific,” he says. “If you have any ideas, let us know.” 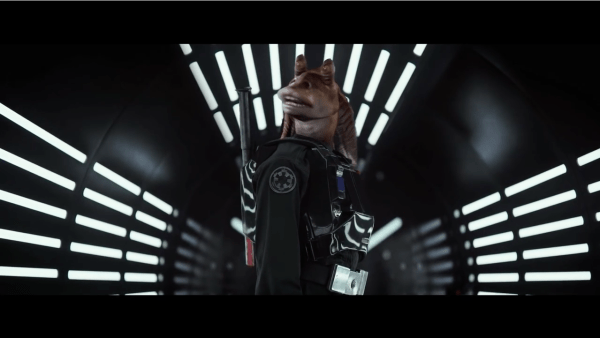 Watch Jar Jar Binks and Chewbacca Mom Invade the Rogue One Trailer in This Hilarious Star Wars Parody
Next Up: Editor's Pick