It’s an odd thing to suddenly realize you need a drone. Just a few years ago, the small, flying machines were the stuff of nerds’ dreams. Today, through ever-improving and cheapening technology, they’re everywhere.

I came to my own aerial epiphany earlier this week, when I heard some sort of a critter rooting around in my chimney. Terrified of heights, and loathe to spend money on things like an exterminator, I had two options: climb a ladder 30-something feet and possibly go beak-to-beak with a nesting mamma bird, or float a piece of fun, modern technology up there from the safety of the ground.

As luck would have it, I also had an Odyssey Pocket Drone hanging around, waiting for its moment in the sun. I intended on writing a review of the $129 device as homeowner’s equipment rather than a plaything. Marketed as a toy, the quadcopter can fit in your pants pocket (or toolbox), and seemed ideal for getting a peek in your gutters, or taking a look at out-of-sight places on your roofline. So when my chimney issue presented itself, I couldn’t resist killing two birds with one drone, so to speak.

Slightly chunkier than an iPhone 6 but much lighter, the Pocket Drone features four collapsible rotors that fold into the quadcopter’s body for easy storage. It isn’t app-connected; it comes with a radio remote controller that, frankly, looks like it could have come with an off-brand, early 90’s radio-controlled racer. Covered with a bunch of poorly labeled (if labeled at all) buttons, it can connect to the drone from a maximum of 100 feet away.

The Pocket Drone also packs a bunch of other necessities. It’s got an onboard “HD” camera (no specs are provided), a four-gigabyte microSD memory card, four extra rotors, and a carrying case. The 3.7-volt battery takes 45 minutes to charge via a supplied USB dongle, and is good for about six to eight minutes of flying. That might seem like a disappointing amount of air time, but a bigger battery would only weigh the thing down.

When flight time came, I unfolded the Pocket Drone on my front walk, expecting to zip right up beside my chimney and get a good peek at what was going on inside. Instead, the little UAV (Unmanned Aerial Vehicle, in drone parlance) careened left immediately upon take-off and buzzed past my wife and son, who sat watching while the overconfident old man acted like he knew what he was doing.

And that’s the thing about drone piloting that you don’t understand until you actually try it — it’s hard. Sure, you look at drone racers and think, “I’ve played a few hundred games of Mario Kart, I can do that.” But you’re wrong. Even with advanced controls like “smart fly,” auto hover, and auto return modes — which the Pocket Drone has, I was just too much of a dad to read the directions — it can be very challenging to pilot a drone well, especially on the first try. And besides, just like the other bits of hardware in your toolkit, you should really practice before using it to get something done. It’s like buying your first jigsaw, removing it from the package, and expecting to renovate a bathroom with it in short order.

But the Pocket Drone is much safer and more enjoyable than anything else you’d find in your toolbox. As I revved up for a second attempt at a chimney fly-by, I couldn’t help but smile and laugh. The copter took flight, and resisting the urge to jam the joysticks as far as they go, I was able to get control and take the drone up to the trouble spot. It was exciting — I was getting the job done.

And then, out of nowhere, a monster gust of wind took it off course and flying out of sight. I eventually found it off the ground, nested in a tall tree like a wayward kite. I managed to get it down, but by then it didn’t have enough battery for another pass. Instead, I backed down from my aerial ambitions and called the chimney repair guy. His visit was much more expensive — and nowhere near as fun. 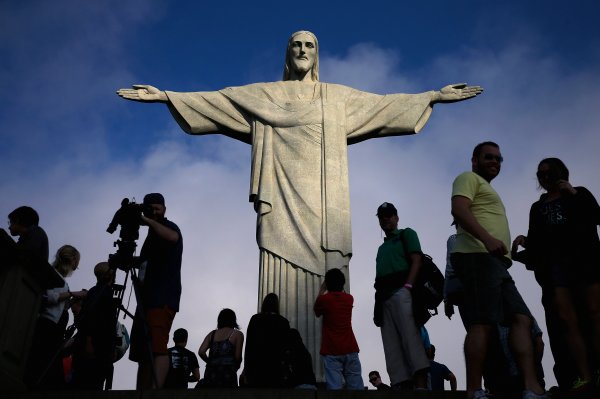 See a Stunning 360-Degree Drone Panorama of Rio's Christ the Redeemer Statue
Next Up: Editor's Pick