Republican Congressman: I Signed Anti-Trump Letter For a 'Clear Conscience'

Virginia Rep. Scott Rigell arrives for the House Republican Conference meeting in the basement of the U.S. Capitol on Tuesday, Sept. 29, 2015.
Bill Clark—CQ-Roll Call,Inc./Getty Images
By Will Drabold

Virginia Rep. Scott Rigell was one of two sitting members of Congress to recently sign a letter calling on the Republican party to stop supporting Trump’s presidential campaign.

“There is not one character trait in Donald Trump I would want my son to emulate,” Rigell told TIME on Friday. “I’m so embarrassed to be identified with him and in fact, I couldn’t be.”

Seventy former Republican elected and party officials had signed the letter when it was leaked last week. Addressed to Republican National Committee Chairman Reince Priebus, the document calls for the party to focus funds on supporting down ballot candidates over Trump. This week, two sitting members of Congress, Wisconsin Rep. Reid Ribble and Rigell, signed on. The total number of Republican signatures has passed 120.

Rigell came to Congress in 2010 during the Tea Party wave. He is not running for reelection this year. While he describes himself as “very conservative” — he favors temporarily preventing Syrian refugees from entering the U.S. and wants to build the wall along the Mexican border — Rigell believes Trump’s candidacy is “catastrophic” for the Republican agenda.

“I need to have a clear conscience in this matter,” Rigell said to explain why he signed the letter and endorsed former New Mexico Governor Gary Johnson, the Libertarian nominee for President. The Virginia congressmen believes a Republican hold on the House is more fragile than most understand. “I think the Senate is in real doubt,” Rigell added. “That is a very steep hill to climb.”

The letter Rigell signed was delivered to Priebus earlier this week. The Republican Party has yet to comment on the letter, though multiple reports say party insiders are considering pulling funds from Trump’s campaign.

On Thursday, Trump bought $4 million in television ads, the first such purchase of his general election campaign. 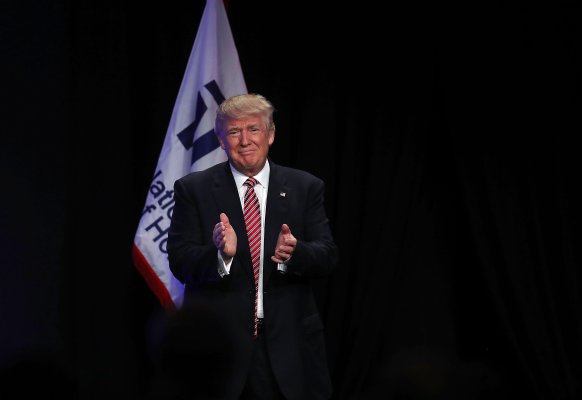 A Teacher on Donald Trump: How to Talk to Students About 'Character'
Next Up: Editor's Pick