A Brief History of the Clinton Family's Chocolate-Chip Cookies

Democratic Nominee for President Hillary Clinton and former US President Bill Clinton on stage during final day of the Democratic National Convention at the Wells Fargo Center in Philadelphia on July 28, 2016.
Tannen Maury—EPA
By Daniel White

While Bill Clinton could soon be the first male presidential spouse, he won’t be fully participating in a 24-year-old presidential election tradition for spouses: the Family Circle Presidential Cookie Poll, a.k.a the First Lady Cookie Contest.

The recipe the Clintons have opted to submit to the magazine—labeled the Clinton Family’s Chocolate Chip Cookies—is Hillary Clinton’s original 1992 recipe, according to the Washington Post. In the poll that opened Thursday, those cookies will face off against Melania Trump’s Star Cookies.

This cookie face-off actually has a long history with the Clintons, as Hillary’s comments on the campaign trail in 1992 are the reason it began.

During a debate before the Michigan and Illinois primaries, Bill was accused by a rival of delivering favorable contracts to his wife’s law firm during his tenure as governor of Arkansas, TIME reported. The comment rattled Hillary, resulting in her making a comment that provoked immediate backlash: “I suppose I could have stayed home, baked cookies and had teas,” she said, speaking of “the sort of thing that happens to women who have their own careers.”

Her comments outraged many American women into a fit of rage, as evidenced by the Letters section in the April 20, 1992, edition of TIME:

Family Circle saw an opportunity in the controversy, according to the Post, setting up a bake-off between Barbara Bush and Clinton. Clinton said, reported the New York Times that July, that if the cookie comment were going to become a competition, she intended to win. Not only was her recipe the product of a lifelong love of chocolate-chip cookies—beginning with her family’s Christmastime tradition of seeing who could bake the largest—but she was also willing to campaign hard on behalf of her recipe. “My friends say my recipe is more Democratic,” she was quoted as saying, “because I use vegetable shortening instead of butter.”

Clinton’s determination (or at least her sweet tooth) paid off. She won—along with her husband, who defeated George H.W. Bush to become the 42nd President of the United States.

The winner of Family Circle’s First Lady Cookie Cook-Off ended up in the White House in every election between that contest in 1992 and 2008, when Cindy McCain took home the prize. Clinton has won against Bush’s chocolate chip cookies in 1992 and Elizabeth Dole’s pecan cookies in 1996, now she’s up against Melania Trump’s sugar cookies. 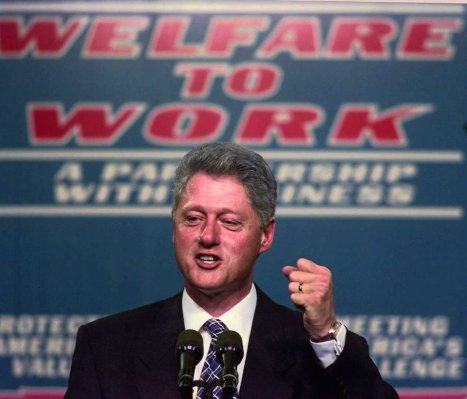 Why Bill Clinton Signed the Welfare Reform Bill, as Explained in 1996
Next Up: Editor's Pick