John Krasinski may be a famous television and movie star, but he maintains that he accomplished his most noteworthy success on the day he married Emily Blunt.

“That is legitimately my greatest achievement, and I’m OK saying that,” he told the Huffington Post during a recent interview.

The 36-year-old actor went on to talk about how impressed he is by his wife’s talent at the Thursday night premiere of his new film The Hollars, revealing he cried the first time he heard her sing. “I came to visit and they were doing the pre-records on Into The Woods, and I remember [director] Rob Marshall turning to me and he said, ‘It’s so great,’ and I said, ‘Yeah, I’ve never seen her sing,'” he told Entertainment Tonight. “Rob Marshall did the slowest double take of all time and then queued a 125-piece orchestra and she started singing and I just wept.”

And of course, he also gushed about his two children with Blunt, daughters Violet and Hazel. “All the clichés of parenting are true and you feel all sort of new things,” he said. “[Hazel’s] amazing. She really loves the baby and I think there is this idea of, ‘Oh my God, she is adorable.’ I mean when a 2-and-a-half-year-old hugs a newborn baby it’s one of the cutest things you will ever see.” 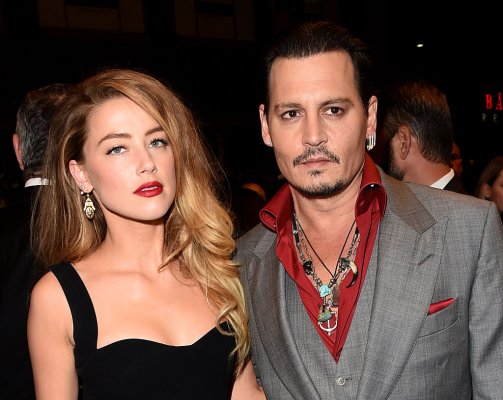 Amber Heard to Donate $7 Million Divorce Settlement to Charity
Next Up: Editor's Pick