Donald Trump’s first general election television ad focuses on some of the same themes he’s been hitting since his first day on the campaign trail: safety, immigration and border security.

The ad begins with a photo of Hillary Clinton, and, flicking through dark images of people with their faces blurred, claims that under her leadership, “Syrian refugees flood in, illegal immigrants convicted of committing crimes get to stay… Our border open, it’s more of the same, but worse.”

The ad then switches to a lighter, more patriotic tone, promising that Trump will bring “change that makes America safe again.”

Trump’s first TV ads of the general election will begin running Friday in four swing states. The $4 million ad buy will broadcast them in Florida, Ohio, North Carolina and Pennsylvania from Aug. 19-29. Clinton has already spent $61 million on TV advertising, according to NBC News, and she released a new ad on Thursday hitting Trump for not releasing his tax returns. 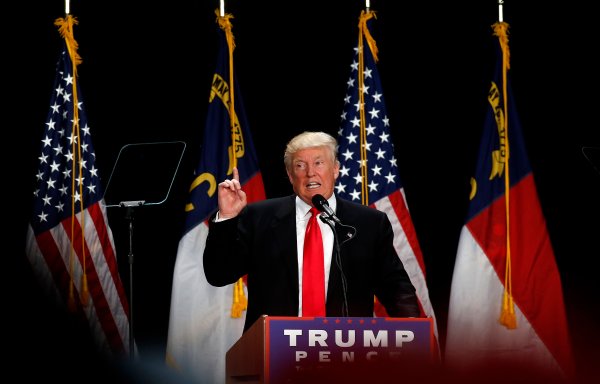 Donald Trump To Visit Louisiana Areas Hit by Flooding
Next Up: Editor's Pick