When others looked at Uber’s aggressive expansion around the world and wondered if the super-unicorn wasn’t going too fast or taking too little care, one imagines the founders of Otto looked on with much approval.

Before January, this startup specializing in outfitting commercial trucks with self-driving technology did not exist. Its expert employees were toiling away on autonomous vehicle projects at places like Google, Apple and Tesla. They left to start this venture, says cofounder and former Google Maps head Lior Ron, because they wanted to bring something to market “sooner rather than later.” And now, in a deal worth an estimated $680 million, the San Francisco-based Otto has become an independent division within Uber, another company “with that level of intensity and urgency and focus to start putting cars on a road, and not as an R&D exercise,” as Ron puts it, referring to research and development.

There were other draws, too. Uber has formed its own expert team of robotics experts, many from Pittsburgh’s Carnegie Mellon University, to help launch self-driving cars that will ferry its users from A to B. With this deal, Uber may have acqui-hired Otto’s seasoned staff, but that staff is also clearly excited about having access to those minds in Pittsburgh. There’s also Uber’s wealth of data, which Ron describes as nothing short of historic. (“Just imagine tapping into the collective Uber brain of all the cars going on every road in every state in every kind of weather in every time of day,” he says.) And there is Uber’s know-how when it comes to building marketplaces, which is a key part of Otto’s vision.

There are tens of millions of commercial trucks in America, and Otto wants to do for them what Uber does for users of its namesake app. Say someone wants to ship a couple tons of strawberries. Rather than contacting a broker, who then contacts a bunch of freelancing truckers–and charges a cut for hooking them up with a job and managing the details–people with trucks and people who need things shipped in trucks could connect through an app. And rather than waiting and wondering, the strawberry shipper could check in on the truck’s progress at any point, much like Uber users watch their cars inch closer in real-time thanks to GPS.

“We’re presenting a whole new business unit for Uber in terms of the commercial transportation industry,” says Otto product manager Eric Berdinis, during a test drive on California’s Interstate 280 in one of the firm’s white Volvo big rigs. “And we have all Uber’s resources at our disposal to help bring that to the road faster.”

The Otto team believes they can speed to market in the commercial trucking world in part because there are fewer problems to solve compared to passenger vehicles. For now, their aim is to outfit trucks to drive themselves solely “from exit to exit” on highways. And that means no city driving — no pedestrians, no traffic lights, no bicycles, no proverbial kid chasing his hoverboard into the street. And the company believes there is a much greater incentive for driverless tractor trailers to be widely adopted as fast as possible.

“With a consumer vehicle, you’re paying out of pocket for some driver comfort,” says Berdinis, who used to work on wearable technology at Motorola, as the truck steers itself at the set limit of 55 mph. But outfitted with the right automation tech, truck drivers stand to lower their likelihood of crashes and thus save on insurance; to increase fuel efficiency by up to a third and save loads on gas; and to get way more use out of a very expensive asset that often sits idle because truck drivers have safety limits on how long their driving stretches can be.

If, Berdinis says, the driver could put the truck in “cruising” mode, as they call it, and technically go off duty, getting some shut eye in the berth behind the driver’s seat, a truck could drive itself for hours—with the driver still collecting the usual rate per mile. But for now, drivers are still needed — not only to oversee the driving, but for all the things that happen either side of onramps and off-ramps, like the city driving and logistics, the docking and parking and weighing and so forth. “They’re still in the cabin,” Ron says.

That’s the pitch, and Otto employees say that truck drivers are generally very receptive to it. While Uber is openly working to make Uber drivers obsolete—the first self-driving Ubers are set to go live in Pittsburgh in the coming months—Ron says that for “the foreseeable future” Otto intends to only be a “co-pilot” that helps drivers make a better living, while the company gets access to data from vehicles outfitted with its hardware. That will include in-house lasers the team is developing that provide 500-point 3D pictures of the environment, dozens of times per second, as well as more run-of-the-mill ultrasonic, radar and camera sensors. Otto plans to get its equipment on partners’ trucks for testing in the next 12 to 18 months.

Will Uber take a cut from the commercial truck marketplace app, assuming it takes off? Will Otto sell its hardware for a profit or lease hardware by the mile so it’s affordable for a larger range of data-spewing vehicles? For now, the answers to those business model questions are “TBD.” And the technology is still learning to cope with all the factors highway driving still brings into play, especially when trucking along in an 18-wheeler.

On our test drive, the human firmly planted in the truck’s driver’s seat took the wheel once when a broom popped up on the highway, and again when there was construction and he had to merge into thick traffic in the adjacent lane. To disengage, he hit a big red button on the dashboard. Meanwhile, a copilot sitting in the front passenger seat took notes so the engineering team could look at any elements that their algorithms weren’t already accounting for. In many ways, these drivers are out there, three shifts a day, looking for trouble. 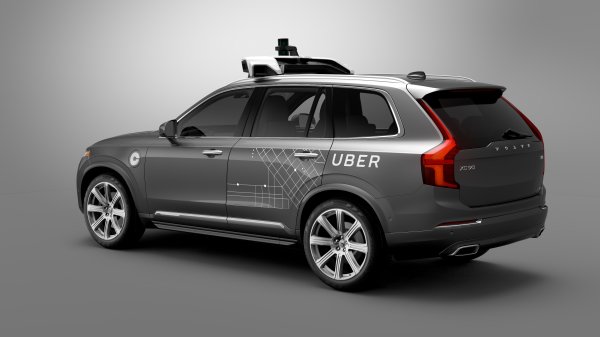