Ryan Lochte sparked an international spectacle full of chaos and confusion this week when he claimed that he and three other U.S. Olympic swimmers were robbed at gunpoint in Rio — a crime Brazilian authorities say the athletes made up.

The 12-time Olympic medalist’s harrowing story, that at one point involved a gun being held to his forehead, unraveled Thursday as Brazilian authorities said the Americans “were not victims” of the purported crime and as security camera footage surfaced that cast doubt on the swimmers’ tale. Here’s how Lochte’s story shaped up and ultimately fell apart:

The Buildup
Rumors began to swirl of a possible armed robbery early Sunday that may have involved Lochte and some of his fellow teammates after Fox Sports News in Australia reported about it.

The story grew after Lochte’s mother told USA Today that her son and the other swimmers — later identified as Gunnar Bentz, Jack Conger and Jimmy Feigen — were “shaken up” after having their wallets taken.

An International Olympic Committee spokesman first said the robbery reports were “absolutely not true.” But Lochte confirmed the encounter later Sunday during a beach interview with NBC’s Billy Bush.

None of the U.S. athletes were harmed, according to a statement U.S. Olympics Committee spokesman Patrick Sandusky issued Sunday. The group had left the French Olympic team’s hospitality house and was on their way back to the athletes’ village early Sunday when they said the robbery occurred, the statement said.

Read more: Ryan Lochte Has Never Played By the Rules

The Teardown
The mystery of the purported crime deepened after police were unable to find the taxi driver said to be involved in the incident or corroborate any details the American athletes gave them, Reuters reported Wednesday.

The news agency also said a Brazilian judge issued an order to seize the passports of Lochte and Feigen to prevent them from leaving the country because of inconsistencies in accounts of their robbery and needed to be questioned further.

Lochte had already flown back to the U.S. by then, but Brazilian officials on Wednesday removed Conger and Bentz from a plane at Rio International Airport.

On Thursday, Brazilian authorities suggested the U.S. swimmers fabricated the story following an incident in which they vandalized a gas station’s bathroom and then paid for the damage on the spot.

Video footage captured over the course of the night in question shows the athletes interacting with gas station employees and security guards. They can be seen in the edited tape entering a bright yellow taxi and exiting it apparently after a man confronts them. At least one passenger appears to open his wallet as he leaves the vehicle as another passenger exits with his hands up.

A top Brazilian police official said the four men were drunk after a night of partying and damaged the door of a bathroom, a soap dispenser and a mirror. “Their claim that they were the victims of assault or some kind of violence is not true,” State of Rio de Janeiro Police Chief Fernando Veloso said in a televised press conference, according to a CNN translation.

Veloso called on the four athletes to apologize because their claims “sullied” the name of their city. The police official admitted that at least one security guard had pulled a gun on the athletes when one of them appeared “disturbed somehow.”

The group of swimmers paid $20 in U.S. dollars and 100 Brazilian Real on the spot for the damage. Late Thursday, Feigen agreed to make a donation to charity of 35,000 reales ($10,800) before leaving the country. Such donations are often made to avoid minor charges in Brazil.

Lochte, who had written on Instagram that “it is true” he and his teammates were “victims of a robbery,” told USA Today on Tuesday that the group didn’t initially tell officials about the incident “because we were afraid we’d get in trouble.”

Bentz and Conger flew home Thursday to the jeers of a local crowd who called them “liars” and “fakes,” Reuters reports.

The U.S. Olympic Committee (USOC) issued an apology “to our hosts in Rio and the people of Brazil” after their departure, calling the robbery scandal a “distracting ordeal in the midst of what should rightly be a celebration of excellence.” 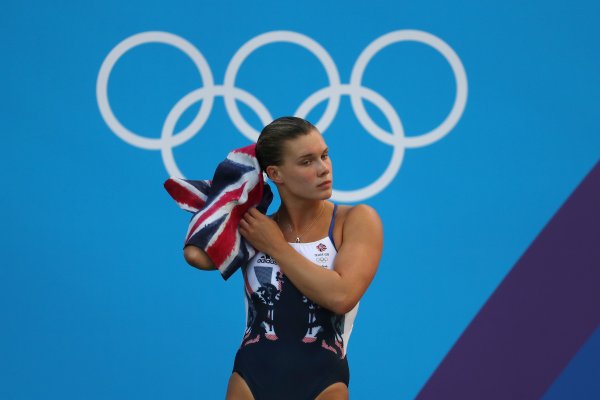 There's Actually A Good Reason Why Divers Shower and Soak in the Hot Tub
Next Up: Editor's Pick