The U.S. Is Ending Private Prisons for Federal Inmates. So Where Will the Prisoners Go?

The Department of Justice wants to end the federal government’s reliance on private prisons—which could mean a big change for thousands of federal prisoners currently doing time in private facilities.

Private companies now run 14 federal prisons across the country that hold about 22,000 federal inmates. The DOJ plans to stop renewing some of those contracts, “beginning the process of reducing—and ultimately ending—our use of privately operated prisons,” Deputy Attorney General Sally Yates said in a memo. The move follows a DOJ report released earlier this month finding that private prisons “incurred more safety and security incidents per capita” than those operated by the Bureau of Prisons.

The DOJ directive will reduce the total private prison population to fewer than 14,200 inmates by May 2017, a 50% reduction since 2013. But where will all those prisoners go?

The answer likely lies in the federal government’s own existing prisons, which will have the space to absorb additional inmates because the nation’s prison population has declined over the past decade, experts say.

“The memo is premised on the belief that a decline in the number of federal prisoners will free up space for others,” says Martin Horn, a corrections professor at the John Jay College of Criminal Justice.

The growth of private prisons mirrors the decades-long increase in inmates around the country. In 1980, there were roughly 300,000 state and federal prisoners nationwide, but by 2013 there were 1.5 million, leading to prison overcrowding and the outsourcing of inmates to privately held companies. Private prisons in 1980 held just 25,000 federal prisoners and hit a peak of almost 220,000 in 2013. But over the last several years the number of prisoners has ticked down as states have overhauled mandatory minimum sentencing laws, given judges more discretion in sentencing, especially in juvenile cases, and focused on programs to prevent recidivism.

In 2014, the number of prisoners overall decreased nationwide by 1%, while the number of federal prisoners has declined by more than 20,000 to roughly 197,000. Federally run prisons are still 20% over-capacity, but it appears that officials believe that number will continue to go down, clearing space for new prisoners to move in.

The DOJ report harshly criticized conditions found at several private prisons that it studied, a reality that has been the subject of numerous stories by national publications and news outlets. One incident that appears to have spurred the DOJ to look into private prisons occurred in May 2012 when a correctional officer was killed during a riot at the Adams County Correctional Center in Natchez, Miss., a facility run by Corrections Corporation of America (CCA).

“The inspector general’s report used to buttress this decision has significant flaws,” said Jonathan Burns, a CCA spokesperson, in an email. “The findings simply don’t match up to the numerous independent studies that show our facilities to be equal or better with regard to safety and quality, or the excellent feedback we get from our partners at all levels of government.”

Along with CCA, the other companies that run federal prisons in the U.S. are the Geo Group and Management and Training Corporation (MTC).

While the DOJ memo is significant, it isn’t binding for states, which currently have roughly 100,000 of the total 130,000 inmates who are living in privately run prisons, according to the Bureau of Justice Statistics. But opponents of privately prisons are hoping that states will take a second look at their contracts following the DOJ’s directive.

“I think it should and hopefully will provide an impetus for states to reduce their reliance on private prisons and ultimately ban them entirely,” says David Shapiro, a Northwestern University law professor. “I think it adds to a growing movement to reject for-profit incarceration.” 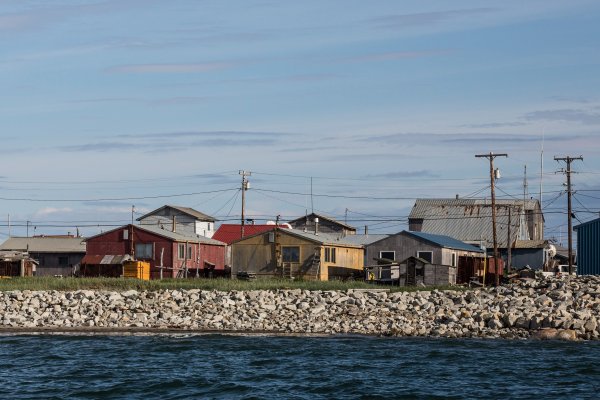 Alaskan Village Votes to Relocate Because of Global Warming Threat
Next Up: Editor's Pick