Finally, the U.S. Men's Basketball Team Is Playing to Win

The U.S. men’s basketball team entered Wednesday evening’s quarterfinal against Argentina in an unenviable place. Favored to win Olympic gold in a cakewalk––even without stars like LeBron and Steph––the squad has looked mighty shaky of late.

First, Australia leads for the bulk of one game, before Carmelo Anthony and Kyrie Irving bailed everyone out. Then, a Serbia team with one active NBA player was one three-pointer away from taking the U.S. to overtime. The NBA All-Stars got lucky that that the ball bounced off the rim. Another nailbiter followed Sunday when they edged France, 100-97, despite the French team playing without their veteran leader Tony Parker. Clearly something hasn’t been clicking on this latest edition of America’s NBA stars.

Maybe we just needed to take a deep breath.

Team USA drew a wily foe in Argentina. Led by Manu Ginobili, another San Antonio Spurs star, they play basketball’s version of the “beautiful game” – the ball always moving, flowing across the court. Argentina won Olympic gold a dozen years ago, knocking the U.S. out of the semis. A handful of Argentine players from that 2004 team were still playing Wednesday – Ginobili, Luis Scola and Andres Nocioni. They were older, but still savvy. America’s run had to end sometime, right?

Or perhaps the U.S. just needed the stakes to be raised. Faced with their first elimination game of the 2016 Olympics, the Americans clobbered Argentina 105-78.

What changed? They executed well, for one. The game plan was solid: space the floor, drive to the basket and kick the ball to Kevin Durant, who made seven threes. They moved the ball well, stood firm on defense in the post and used superior guard speed to force turnovers. “The physical part was against us,” says Nocioni.

Team USA’s red-hot shooting and buckle-down defense squashed a delightful Argentine start. Point guard Facundo Campazzo made a series of high-arching flippers and floaters, over the likes of DeAndre Jordan—one of the NBA’s best defensive players—that would make Steph Curry swoon. The squat 5’11’’ Campazzo was an inspiration to weekend warriors everywhere.

Argentina took a 19-9 lead. Hundreds of Argentine fans had crossed the border into Brazil, turning it into a virtual home game for the boys in blue.

And then it ended. The U.S. went on a 27-2 run and never looked back. Durant led the U.S. with 27 points on 9 of 13 shooting and those seven threes. He played like, well, Kevin Durant. “I just didn’t care about the outcome of the game,” Durant says. “I was telling myself in the room today, I’m at my best when I don’t care if we win or lose. It may be different for others players. But for me, I’m more free.”

The Americans can’t get too giddy. They face Spain, a team that has given them fits in the last two gold medal games, in Friday’s semifinal. On the other side of the draw, Australia plays the winner of the Serbia-Croatia quarterfinal.

But Wednesday’s win had the effect of quieting the storm. And it couldn’t have been more fun. With about four minutes left, hundreds of Argentine fans left their seats to fill up the walkway of the upper level, jumping shoulder to shoulder, leaning against thin-looking plexiglass. Brazilians chanted back. It might have been the loudest 25-point blowout in the history of basketball. “At one point, the whole building was shaking,” says DeMarcus Cousins. “Incredible.”

It was one of those weird, wonderful Olympic moments––the type that the U.S. players, by the way, have been chasing all around town. Say this about Anthony, Durant, Green and Co.; they may not be bunking in the athlete’s village, hunkering down in a luxury cruise ship instead, but they’re soaking up Rio. They’ve been cheering on the swimmers, and high-fiving Kerri Walsh-Jennings at Copacabana Beach. They’ve been playing basketball since fall training camp. They deserve a little fun. 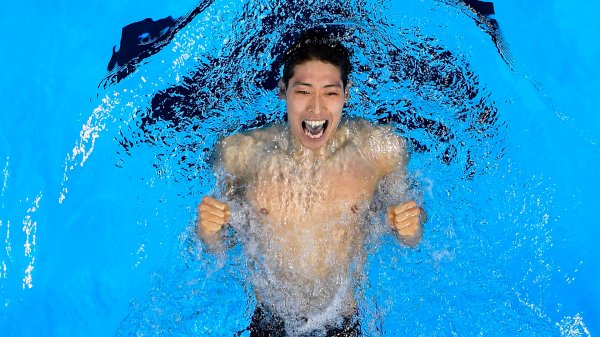 The Best Gold Medal Faces of the Rio Olympics
Next Up: Editor's Pick