Southside With You and 5 Other True Presidential Love Stories

Tika Sumpter, right, and Parker Sawyers in a scene from "Southside With You."
Miramax and Roadside Attractions / AP
By Merrill Fabry

He was a summer associate at the Chicago law firm where she worked, so their all-day first date was partially devoted convincing her it should even be a date at all. The outing also included a trip to the Art Institute of Chicago, a movie (Spike Lee’s Do the Right Thing) and ice cream (Baskin-Robbins).

That story might sound a bit familiar—not just because it has some typical hallmarks of a first date, but also because it’s the story of Michelle Robinson’s first date with Barack Obama, which is the inspiration for the new film Southside With You. It could be just a classic story of meeting a special someone, except that the couple in question would end up in the White House.

The stories of presidential meet-cutes range from Andrew Jackson meeting his wife Rachel while staying at her mother’s boarding house, to Harry Truman knowing Bess since they were in Sunday school together as children, to Richard Nixon meeting Pat Ryan when both were acting in a play at a community theater in Whittier, Calif. Many met at a dance or party: George Washington and Martha; John Adams and Abigail, whom he once addressed in a letter as “Miss Adorable”; George H.W. Bush and Barbara. Oddly, several met when the future First Ladies—Anna Symmes (William Henry Harrison), Margaret Smith (Zachary Taylor) and Mary Todd (Abraham Lincoln)—were visiting their sisters. Still others met through a variety of cousins, siblings, parents and other relatives.

A few of the stories, however, are particularly rom-com-worthy:

In 1794, James Madison was a Congressman from Virginia and a confirmed bachelor of 43. Dolley Todd was a widow of 25 when Madison asked his friend Aaron Burr to introduce them when Burr was staying at Dolley’s mother’s boarding house in Philadelphia. Madison’s desire to meet the young woman was prescient, and provided fodder for some epic words of love: Later that summer her cousin wrote to Dolley that Madison “thinks so much of you in the day that he has Lost his Tongue, at Night he Dreames of you & Starts in his Sleep a Calling on you to relieve his Flame for he Burns to such an excess that he will be shortly consumed & he hopes that your Heart will be calous to every other swain but himself he has Consented to every thing that I have wrote about him with Sparkling Eyes.” They married on Sept. 15, 1794.

This story about Grace and Calvin Coolidge is less about their first date than about their first sighting. The two lived across the street from each other in Northampton, Mass. One day, she was watering flowers and glimpsed a rather peculiarly attired man in a house across the way—he was shaving wearing just his underwear and a derby hat. She burst out laughing. There’s some fuzziness to what happened next, but soon enough they began courting and writing letters by June of 1904. He later explained the hat was to keep his hair out of his face.

Lyndon Johnson’s first date with Lady Bird started with breakfast and, like the Obamas’, it turned out to be an all-day affair. As summer 1934 came to an end, Johnson was working as a secretary to a Congressman in Washington D.C. and was on a trip to Texas when he saw his future wife at a mutual friend’s office and asked her to meet him for breakfast at the Driskill Hotel the next day. She, however, decided to skip the breakfast date for another appointment, which it turned out was next door to the Driskill Hotel coffee shop—so she saw him waiting for her, even after the other meeting concluded. He waved her in and began nonstop chattering, even as the date continued with a drive around Austin. She described it as “just like finding yourself in the middle of a whirlwind.” She met his parents the next day and he met her father shortly after. He returned to D.C. and they commenced writing letters to each other, which you can read online.

In 1949, Nancy Davis was a young actor when her name was associated with communist sympathizers in Hollywood, something that could derail her barely-started career. She got a friend to put her in touch with the President of the Screen Actors Guild, Ronald Reagan, to see if anything could be done. They arranged to have dinner, a business meeting of sorts. Apparently, the suspected communist was another actor named “Nancy Davis.” Reagan recalled her intense worry about clearing her name at their first meeting, and yet the conversation veered to other subjects, and he later wrote that he didn’t get home until 3:00 a.m. that night. The recently divorced Reagan didn’t immediately start dating Nancy, but by March 1952 they were married. “I don’t know if it was exactly love at first sight,” she later said. “But it was pretty close.”

Anyone who watched President Clinton speak at the Democratic National Convention this July will know that the Clintons met at Yale Law School, following in the footsteps of similarly academic meet-cutes of Millard Fillmore and James Garfield. As she wrote in her memoir Living History, he first came to her attention as a guy who wouldn’t stop talking about Arkansas and how great it was. They were in the same class, and kept looking at each other in the library. But it was the following spring when she finally had enough of his glances and went to talk to him herself: “If you’re going to keep looking at me, and I’m going to keep looking back, we might as well be introduced,” she said. “I’m Hillary Rodham.” Even that wasn’t enough to get the romance started, however. At the end of the term they left class at the same time and he walked over to the registrar’s office with her, even though he had already registered—a walk that turned into their first date.

Correction: The original version of this story misidentified which U.S. President married Dolley Payne Todd. It was James Madison. 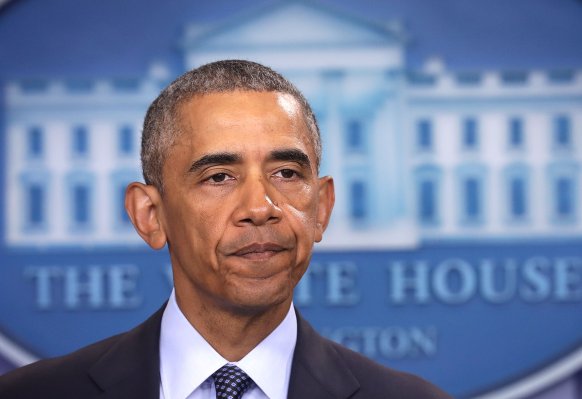 President Obama Denies $400 Million Payment to Iran Was a Ransom
Next Up: Editor's Pick