Ellen DeGeneres Is Not Racist

One of the most disgusting photographs I have ever known was the one in 2000 of then New Jersey governor Christie Todd Whitman. She was riding along on a cop call; when a black man was detained, the cops invited her to take a turn at frisking the man. In the picture, Whitman is heartily grinning for the camera as she frisks—or really, “frisks”—this human being, as if she had caught a massive salmon, as if this were some kind of sport.

I’m not one for using occasions like that to deem someone a racist, but the photo was starkly and appallingly tone-deaf. That photo is of someone ignoring the ignoble history of American law enforcement and its effects on black people, ignoring that excessive profiling—as hot an issue in 2000 as it is today—is a keystone scourge of black communities, ignoring that quite a few criminals have mental health problems, or are truly desperate, or are otherwise victims of circumstances beyond their control.

Apparently we are to have the same kinds of feelings about a new photo: Ellen DeGeneres’ photoshopping of herself in a tweet as riding Usain Bolt’s back, captioned with “This is how I’m running errands from now on.” DeGeneres, we are told, is implying that a black person’s proper place is as some kind of pack animal.

Um, OK. I guess the photo isn’t the very best of ideas in the grand scheme of things. If I had been watching over Degeneres’ shoulder as she composed the photo, I myself would frankly have understood it as coming from her studiously daffy sense of humor combined with an open admiration for Bolt’s ability. But in view of that grander scheme of things always out there, I would have told her that there are people who will interpret the photo as racist.

Interpret, that is, as opposed to actually thinking it’s racist. There’s a difference, and I wonder how many people out there really think Ellen DeGeneres thinks black people are lesser beings than white ones in any sense worthy of public debate. For example, here’s a thought experiment—if the runner of the moment happened to be white, who among us thinks DeGeneres would not have composed the exact same picture?

Yet we might say that DeGeneres forgot that the image of a white woman on a black man’s back is less than optimal given certain realities of American history. Some will be more sensitive about such things than others, and the issues are subtle—I would feel DeGeneres’ action as taking on slight shades of Whitman’s, for example, if the runner were African American rather than Jamaican.

But overall, the question we must ask is why something like a slightly off tweet by Ellen DeGeneres is treated as such a big deal, at all, for any length of time. We dwell on these sorts of things so regularly these days that you can forget how peculiar it is, just as people in the 80’s didn’t know what their hairstyles were going to look like to us decades later. In particular, the unbiased observer would note that these issues are discussed at a distinctly—and needlessly—rabid pitch.

So melodramatic, so sloppy, so recreationally abusive, is the terminology we have become so accustomed to. Someone does something a little tacky and they are termed not tacky but a racist, a sexist, a fascist. We now know what it felt like in the Middle Ages when someone who neglected to perform some ritual or deviated from tradition in some small way was deemed a full-blown heretic, or how it felt in the 50’s when someone with some leftist friends or who had attended a few Marxist meetings 20 years ago was deemed a full-blown Communist.

It is hard to miss a certain joy in this ritual, stylized witch hunting. A certain Blue American type these days is consumed with a lust for being offended, never feeling so alive as when finding something “problematic.” Some may consider this a sign of enlightenment. But enlightenment to what end? Is this endless outing of people as moral perverts designed to change something, or is it merely a kind of ritual piety designed to demonstrate our goodness to the PC gods?

It’s hard not to suspect the latter given how little concern there seems to be for results. For example, a few years ago around this time, many considered it a matter of great urgency to condemn Miley Cyrus for an awards show act Cyrus likely intended as celebratory, earthy and tongue-in-cheek but which many found somewhat insulting. The usual suspects raged and examined and condemned for weeks, Cyrus basically sat pat, and today, we can see that the whole fracas served precisely no purpose—except perhaps to serve as a model for what we are now seeing happen to Ellen DeGeneres.

Or, a couple months ago, Blake Lively for a comment about her “Oakland booty.” And next month, surely something somebody will say that will be gleefully interpreted as “-ist” in some way, for no purpose whatsoever except—enjoyment? It looks especially like enjoyment when the inquisitors refrain from even making sense, as in calling a skit DeGeneres had on her show a while ago “racist” that depicted Nikki Minaj as a child in a mock-sitcom in which she and her parents had ridiculously big behinds. Minaj has called constant attention to the generosity of her posterior as part of her very brand, and therefore a skit making fun of that very thing about her, not black people in general, qualifies as … an insult to African-Americans? There’s no logic here: the indignation is the aim and triumphs over all.

Ellen DeGeneres is a racist? The exploration of such a thing now elicits as urgent a response in many smart people as global warming, endemic poverty and gun control. It is time to reconsider the mission creep that has led the left from seeking to change the mechanisms of society to stirring up campfires once or twice a month about awkward witticisms, passing indications of ignorance and other eternal wrinkles of human psychology, in the name of a “social justice” that is really all about self-affirmation.

This is not progress—it’s religion. 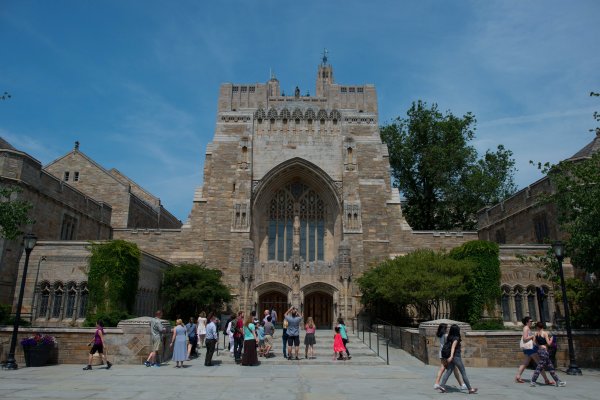 Yale Has One Big Chance to Move in the Right Direction on Race
Next Up: Editor's Pick