'They Can't Kill Us All' Debuts 2 Years After Ferguson

Wesley Lowery is a reporter for the Washington Post and a member of the team awarded the 2016 Pulitzer Prize for National Reporting.

On August 11, 2014, I landed in Ferguson, Missouri for the first time to report on the death of Michael Brown, which had already sparked days of angry protests and nights of frightening violence. At most, I figured then, I’d spend about two or three days reporting the story. It’s been two years now. Protests have spread throughout the nation. And still the story isn’t done being told.

Writing They Can’t Kill Us All (out Nov. 15) is my latest attempt at grappling with our nation’s ongoing struggle with race, justice and ongoing penance for our original sin. In the months since Ferguson, Michael Brown’s name has been joined by John Crawford, Tamir Rice, Walter Scott, Freddie Gray, Sandra Bland, Alton Sterling and Philando Castile.

And, as the young activists will tell you, the movement for black lives is about not just policing, but about the totality of the American devaluation of black life. As the slaughter of nine black churchgoers in Charleston and unrest at the University of Missouri and other campuses underscored, the historic presidency of Barack Obama did not usher in a post-racial reality.

I wrote this book by revisiting two years of messy notebooks and recorded interviews, which helped me further make sense of my own experience as a 26-year-old black man charged with covering a movement aimed at protecting lives like my own. The book’s cover features a compelling image from Devin Allen, the Baltimore photographer who shot the defining images of that city’s nights of unrest. I want to capture the ascent of this new national movement, in part, by exploring the lives and motivations of the young leaders I met: Johnetta Elzie’s pained tweets from the streets of Ferguson to Bree Newsome’s defiant climb to remove South Carolina’s confederate flag to Brittany Packnett’s persistence and poise as she turned to President Obama and relayed the movement’s underlying message to the leader of the free world: “our lives matter, stop killing us.”

It remains unclear how history will look back on the protest movement. For now, it seems, the protests will continue, and I’ll keep working to tell the story. 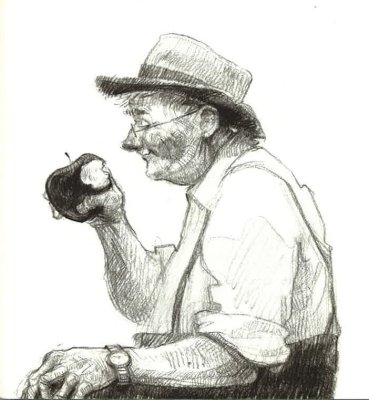 Elegy With a Side of Applesauce
Next Up: Editor's Pick