Footage has emerged of Germany‘s vice-chancellor Sigmar Gabriel giving the middle finger to a group of far-right protestors in Lower Saxony in northwestern Germany last Friday.

The Social Democrat politician was visiting the city of Salzgitter for an election campaign event when he was accosted by a group of masked protesters holding banners bearing the slogan “Traitor”, AFP reports.

Gabriel has publicly condemned his father as a “die-hard Nazi” in the past. This is referenced by the Neo Nazis in the footage, who tell him “Your father loved his country, and what do you do? You destroy it,” reports The Guardian. The Social Democrat Party has confirmed that the video, posted on Facebook by a youth group linked to the neo-Nazi NPD, is authentic.

This is not the first time a member of the party has caused controversy by pulling the offensive gesture. In Sept. 2013, former finance minister Peer Steinbrück shocked the public and his fellow politicians after he allowed the German daily newspaper Sueddeutsche Zeitung to publish a black-and-white photo of him with his middle finger in the air. 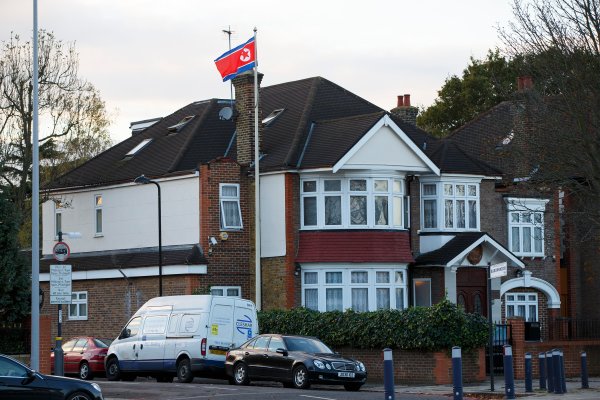 North Korea's Deputy Ambassador in London May Have Defected
Next Up: Editor's Pick