Olympic lovebirds have a quandary that mere mortals do not when it comes to ranking the best day of their lives: “getting engaged” or “winning a medal”? This year, a handful have decided they’d rather not choose, and combined both events into one eventful day.

The latest to take on the Olympic engagement is Will Claye, an American track and field athlete. He won a silver medal in the triple jump on Tuesday, then climbed into the stands to propose to his girlfriend, hurdler Queen Harrison (who competed in Beijing in 2008 but didn’t qualify this time around).

“When I woke up this morning I was like, ‘Today is going to be the best day of my life,'” Claye said, according to the Associated Press. “I’m going to go out there and do what I have to do on the track first and I am going to make her my fiancée after that.”

Earlier this week, bronze medalist Qin Kai proposed to his girlfriend, silver medalist He Zi (both divers from China). Other proposals took place after a rugby match and a walking race.

Harrison sported her new diamond ring along with a “Will Power” tee-shirt. It’s hard to tell in pictures, but based on social media photos, it looks like Harrison’s ring may even match Claye’s medal: silver. 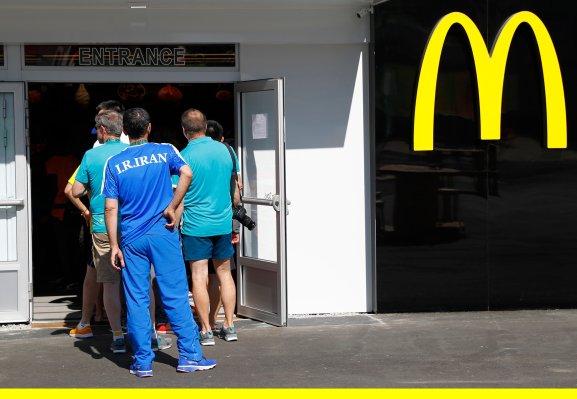 Why the World's Best Athletes Can't Stop Eating McDonald's
Next Up: Editor's Pick