The athletes of Team USA Gymnastics — both men and women — have proven during this Rio 2016 Olympics just how tight-knit their community is, with former and present Olympians rooting on their teammates enthusiastically throughout the Games. And the support has clearly been a winning strategy, as the gymnastics events concluded with the U.S. taking home 12 medals in the sport across events and athletes.

We know how close the women’s Final Five are this year, following in the footsteps of their gold-medal-winning predecessors from 1996 and 2012.

But the men’s team is pretty tight too.

Sometimes it’s the inter-generational support that has been the sweetest to see. Nastia Liukin, who was the individual all-around champion in 2008, has been a constant presence at this year’s Games and major supporter (and selfie-taker) with all the men and women of Team USA.

Meanwhile, other former stars have lent their voices from afar. 2008 Olympian Shawn Johnson East has been following closely.

2012’s Jordyn Wieber lent her congrats to both the women’s and men’s team winners.

Kerri Strug’s big moment was back in 1996 when she landed a critical vault (and sprained her ankle) to earn team gold, but she’s still got the backs of her present-day counterparts.

And viral vault star McKayla Maroney has also been keeping up with the proceedings, callings out Biles and Raisman as her “best friends.”

There have been plenty of moments when each member of the current Rio squad has sent out support, too, like during the balance beam finals:

Or as the final individual events went down, when the men’s and women’s squads got together to cheer on their teammates who still had landings to stick and medals to win.

And at the end of the day, here’s champion Simone Biles and silver medalist Danell Leyva hugging it out.

Turns out Team USA Gymnastics is definitely the sports fam we’d want to join: more than just achieving #squadgoals from year to year (and picking up plenty of famous friends in the process), it’s an athletic community that puts a premium on supporting one another across generations. 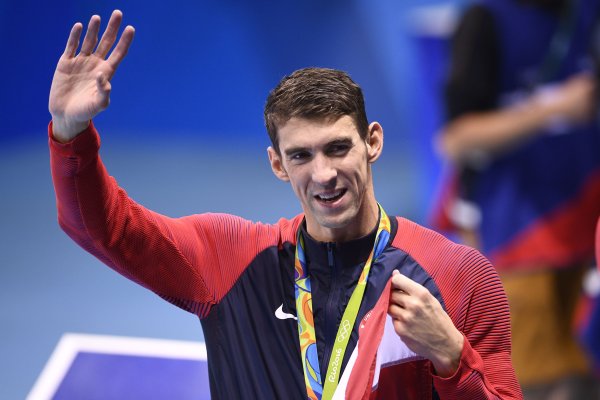 All the Times Michael Phelps Has Insisted He's Retiring
Next Up: Editor's Pick