Olympic Runner Stops to Help Rival Who Fell During a Race

Abbey D'Agostino of the United States (R) is assisted by Nikki Hamblin of New Zealand after a collision during the Women's 5000m Round 1 - Heat 2 on Day 11 of the Rio 2016 Olympic Games at the Olympic Stadium on August 16, 2016 in Rio de Janeiro, Brazil.
Ian Walton—Getty Images
By Dave Quinn / People

Track and field star Abbey D’Agostino may have had one of the most inspiring moments of the 2016 Summer Olympics.

On Tuesday, during the second semifinal heat of the women’s 5,000-meter race, the 24-year-old distance runner showed a remarkable case of Olympic spirit – stopping along the race to help a fallen rival and finishing the race herself despite injury.

It all started when New Zealand’s Nikki Hamblin took a tumble on the inside track. Impossible to avoid the fallen runner, D’Agostino tripped over Hamblin, stumbling to the ground herself.

Rather than get up and plow past Hamblin, D’Agostino stopped to check to see if her Olympic rival could continue and helped her off the ground. The selfless move quickly caught the notice of Olympic broadcasters, who commented on her show of sportsmanship.

Hamblin had tumbled on the inside track seconds before, making it nearly impossible for D’Agostino to avoid the accident.

Continuing on, it was clear the pain of D’Agostino’s ankle injury was settling in. Meters later, she collapsed to the ground.

It was Hamblin this time who came to her aid, checking to see if she was okay to continue.

But D’Agostino wouldn’t back down. She got back up on her feet, and completed the rest of her laps at a slow pace.

Finishing at 17:10.02 – more than two minutes behind heat winner Almaz Ayana – D’Agostino appeared to be all smiles.

Waiting for her at the finish line was Hamblin, who quickly embraced her rival in an emotional moment.

Later, D’Agostino was taken away in a wheelchair by the Olympic medical team. Hamblin appeared by her side in support.

Like Ethiopian runner Etenesh Diro – who made the 300-meter steeplechase finals after falling during qualifiers – Team USA successfully protested and got D’Agostino a spot in Friday’s 5,000-meter final.

Here’s hoping she recovers quickly from Tuesday’s injury to compete. 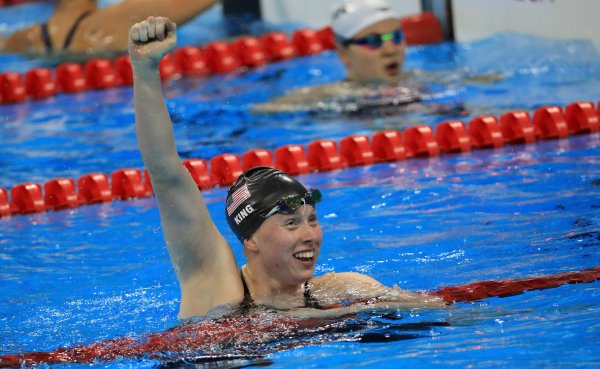