Poll: Hillary Clinton Up by 9 in Florida. Marco Rubio Ahead in Senate Race

The four remaining Republican primary candidates Marco Rubio and Donald Trump debate at the University of Miami on March 10, 2016.
Carolyn Cole—LA Times via Getty Images
By Will Drabold

Donald Trump may have won Florida over Marco Rubio in the primaries, but the two Republicans may be headed for a reversal of fortunes this fall.

A new poll shows shows Hillary Clinton ahead of Trump by nine percentage points, while Rubio is beating both his potential Democratic opponents in the Senate race. The Monmouth University poll shows Trump losing key demographic groups by wide margins, with Clinton drawing 48 percent of the total vote and Trump drawing 39 percent.

Only 19 percent of Florida’s Hispanic, black and Asian voters say they will support Trump. Mitt Romney won white women in Florida by 17 points in 2012, but Trump is currently losing them by 10 points. The candidate is winning white men by 40 points.

Without Florida’s 29 electoral votes, Trump will have to make major gains in other battleground states, like Ohio and Pennsylvania, which have recently gone for Democrats. He is currently losing those states by large margins.

In the Senate race, Rubio is beating the two Democrats battling to face him in the fall with Rep. Patrick Murphy down five points and Rep. Alan Grayson down 11. Nearly half of Florida voters say they approve the job Rubio has done in the Senate, but more than half say his redirection to run for Senate reelection was more out of service to a future presidential run than to the public.

The poll had a margin of error of 4.9% with a sample of 402 likely Florida voters. 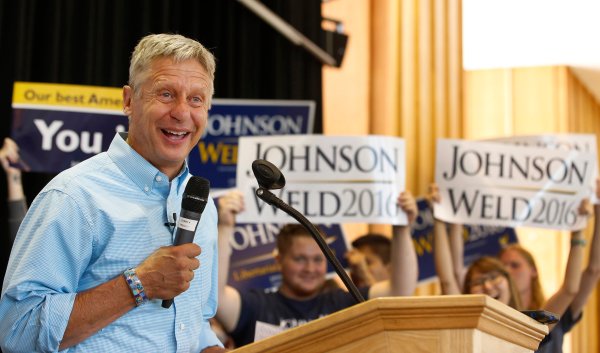 Gary Johnson Is Pulling In More Money Than Ever
Next Up: Editor's Pick