Lilly King of USA reacts after winning the gold medal at the Women's 100m Breaststroke Final at the 2016 Rio Olympics, held at the Olympic Aquatics Stadium in Rio de Janeiro on Aug. 8, 2016.
Dominic Ebenbichler—Reuters
By Hendrix Magley

Heading into the Rio Olympics, Lilly King was just another athlete with a shot. Little known outside of the U.S. swimming program, few expected King to emerge as one of the more prominent figures of the 2016 Games. But her gold medal in the 100m breaststroke and finger-wagging takedown of silver medalist Yulia Efimova, a Russian who had been suspended for a doping violation, turned the Olympic rookie into the de facto spokeswoman for clean sport.

To her father, however, she’s still just a normal college student––albeit one living an abnormal life.

“It’s just hard to imagine that a kid that lives in your house who never cleans her room and can’t fix her car is a gold medalist,” says Mark King. “It’s just bizarre; I can’t describe it any other way.”

We hear about the stresses that Olympic athletes experience everyday, but it can be just as stressful for the parents watching from the grandstands (Exhibit A: Lynn and Rick Raisman, parents of U.S. gymnastics tram captain Aly). King says he tries to cope by blocking out the outside world when watching his daughter race.

“Usually when the meets start we shut our phones off because we just want to be in the moment,” says Mark King. “We try not to worry about Facebook and Twitter because it kind of consumes people at this point.”

King, an incoming sophomore at Indiana University, is from Evansville, Ind. and the community went out of its way to help the family get to Rio. “Evansville has gone crazy, ” King says. “They have just embraced my daughter. They did a lot of fundraising to help make it affordable for us to come here. We’re extremely grateful.”

Lilly King has been swimming since she was 7, but her father says there were few early signs of the promise to come. “If you run into someone who says, ‘When I was 8, I was kicking Lilly King’s butt,’ they’re probably telling you the truth,” King says.

She discovered the breaststroke when she turned 10 and quickly realized it was her specialty. It surely helped that Mark King was a track athlete at Indiana State University, and her mother, Ginny, also swam in college at Eastern Kentucky University and Illinois State University.

That breaststrokers are thought off as a bit apart, something akin to placekickers in football, proved good motivation, her father says. “There’s always a running joke about all the breaststroke swimmers, that they’re like the weird kids on the swim team,” says King. “She uses that to fire her up a little bit.”

Her fire was on prominent display in the pool in Rio, when Lilly King blitzed her way to gold in her first Olympic final and spoke out against not only Efimova, but also members of Team USA with histories of doping violations. “I’m not the sweet little girl,” she said by way of explanation. “That’s not who I am.”

That was clear to Mike Chapman since he began coaching her at age 11. Recalling her first championship, when Lilly King was 12, Chapman says: “We showed up there and she qualified fifth, and she kept saying, ‘I’m gonna win; I’m gonna win,’ and I was just like, ‘Yeah, whatever.’ But she won. She told us all the way she was going to do it, and she did it.”

As Mike King put it, “Whether it’s a practice relay or preliminary here at the Olympics, she just doesn’t like to lose.”

The win gave his daughter a gold medal, the Olympic record and a skyrocketing number of Twitter followers. Still, her dad sees a 19-year-0ld who doesn’t much like cleaning up her room.

“She has to deal with the things that any college freshman who’s going into sophomore year goes through,” says King. “She’s just a real regular kid and a really fast breaststroker.”

Magley writes for Ball State at the Games 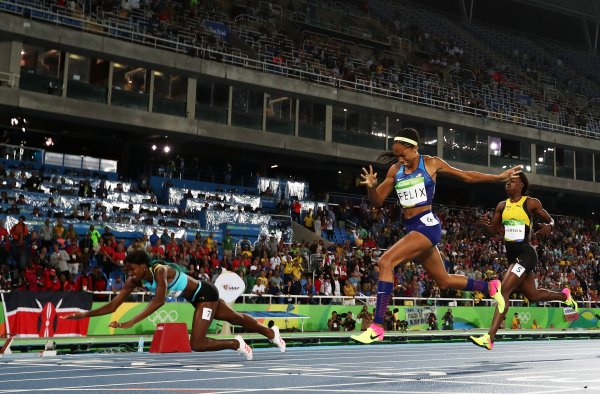