If you only read one thing: Democrats are riding high on a sea of public and private polls showing Hillary Clinton with a comfortable lead over Donald Trump in enough swing states to clear 270 Electoral Votes if the election were held today. Her campaign and her super PAC, Priorities USA, are cutting advertising buys in states they are growing more confident in and shifting them toward expanding the map—which will keep Trump on defense through Election Day. Yet all of that confidence comes with a risk, as President Barack Obama warned donors on Martha’s Vineyard Monday night, that in growing complacent they will fail to turn out the voters they need to win. With 84 days left, there is plenty of time for the polls to rise and fall, particularly around the fall debates.

Donald Trump’s foreign policy speech Monday was an attempt to turn the page on a brutal three weeks for his campaign, but his remarks were riddled with factual inaccuracies—most notably about his own record. Trump criticized the Iraq War he initially supported, then criticized Obama’s rapid troop withdrawal—which he also supported. The same goes for the overthrow of Muammar Gaddafi in Libya and Hosni Mubarak in Egypt, both of which he criticized Monday but supported at the time. While criticizing nation building, he called once again for seizing Iraqi oil, in effect creating a permanent occupation of the country. And he revised his blanket ban on Muslim immigration to a ban on immigration from un-listed high-risk areas, while adding an ideological screening test to ensure those who visit respect American values. And as Trump advisors looked to have him project a presidential image, Trump once again got in his own way, ad-libbing to call his new immigration proposals “extreme vetting” and promising to be “extreme” in responding to radical Islamic extremism.

Hillary Clinton begins debate prep. Biden stumps for an old friend in their shared hometowns. And your under-caffeinated newsletter author thanks a pair of eagle-eyed readers who noted that yesterday’s newsletter incorrectly referred to the Orange Revolution unseating former Ukrainian President Viktor Yanukovych, rather than the 2014 ‘Ukraine Spring.’

In the city where both have roots, the veep and the nominee try to appeal to voters tempted by Trump.

Donald Trump Talks Tougher Tack in the War on Terror

Trump has turned down all invitations [New York Times]

Democrat’s team searches for a close ally willing to dredge up the most awkward, painful accusations against the candidate [P0litico]

“If we are not running scared until the day after the election, we are going to be making a grave mistake.” —President Barack Obama at a fundraiser for Hillary Clinton, seeking to prevent Democratic complacency in light of her strong polling lead.

“Hillary Clinton wants to be America’s Angela Merkel, and you know what a disaster this massive immigration has been to Germany and the people of Germany.” —Donald Trump in a foreign policy speech Monday.

He was one of the most respected intel officers of his generation. Now he’s leading ‘Lock her up’ chants [Washington Post] 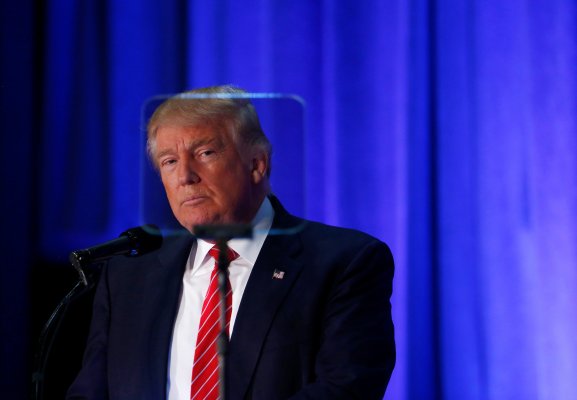 Trump Continues to Lag Behind Clinton in New Polls
Next Up: Editor's Pick